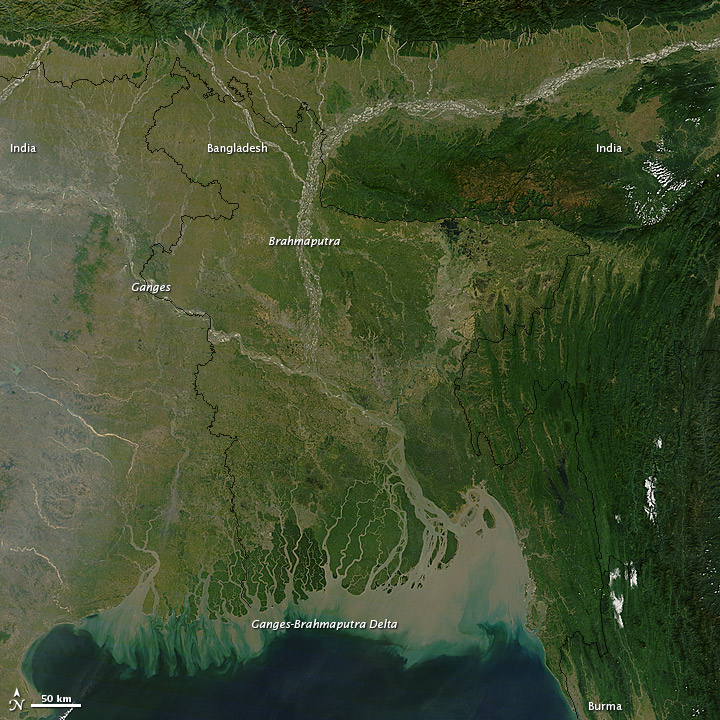 Although climate change is often blamed for coastal inundation in places like the Bay of Bengal, other factors such as dam building and urbanization play an important role. Scientists say that more sustainable development policies can help blunt the impacts of rising seas.

Every year, hundreds of thousands of Hindu pilgrims flock to Sagar, a teardrop-shaped island in the Hooghly estuary, 60 miles south of Kolkata. A temple stands at the southern tip where the island faces the open sea. The location is revered, a place where the holy Ganges River flows into the Bay of Bengal, eventually merging with the Indian Ocean. In recent years, Hooghly also has become known as an estuary of vanishing islands: Three have been submerged over the past few decades. Some villages in Sagar have been forced to retreat from the advancing sea. Visiting journalists often describe inhabitants here as the region’s first climate refugees, attributing the loss of land to sea level rise.

Yet science is now telling a more complex story. Indeed, a major cause of subsidence and loss of coastline in the Hooghly estuary, researchers say, is the construction of dams on rivers that flow into the Bay of Bengal, sharply reducing the supply of sediments. Where sediment still flows and tides allow, mangrove islands are growing — one of them, New Island, has tripled in size. Dredging and protective walls for the local port also have altered the hydrodynamics of the estuary, increasing erosion of some islands, says Tuhin Ghosh, director of the School of Oceanographic Studies at Jadavpur University in Kolkata. And in Sagar, sand dunes near the temple have been levelled for a concrete road. “If you remove the natural barriers and flatten the land, of course the water will come further up,” says Ghosh. “Sea level rise is only part of the picture.”

Like many coastal communities, the residents of Sagar Island are on the front line of climate change. But their vulnerability is shaped as much by processes in the Ganges-Brahmaputra Delta that cradles eastern India and Bangladesh — ranging from natural tectonic shifts and river movements to human interventions like dams, urbanization, and groundwater extraction — as it is by rising seas.