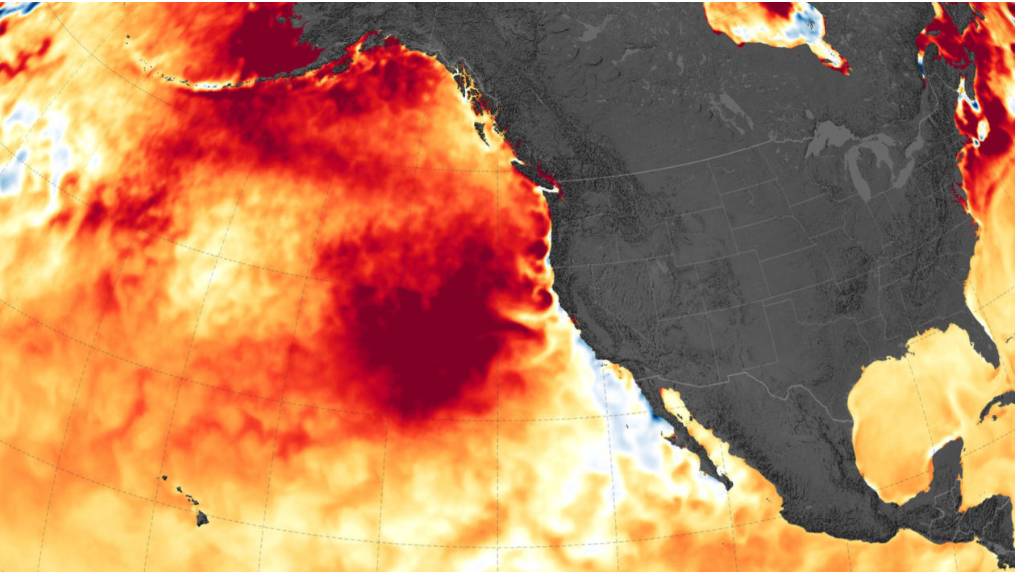 With oceans absorbing more than 90 percent of global warming, marine heatwaves are becoming hotter and larger and are lasting longer. Scientists say the trend has major ecological consequences, from altering fish and plant populations to forcing whales into hazardous waters.

Off the coast of California this August a sea monster of record size was spotted: a patch of warm water that grew to the size of Canada, 9.8 million square kilometers simmering up to 4 degrees Celsius warmer than usual. “It’s off the chart,” says Andrew Leising, a fisheries oceanographer at the National Oceanic and Atmospheric Administration who is mapping the marine heatwave on his website, nicknamed the Blobtracker. By Leising’s reckoning, in September, the unglamorously-named “NEP20b” became the biggest-yet-spotted blob of warm water there since satellite records began in the early 1980s.

Researchers are now scrambling to chart or anticipate the impacts of the NEP20b blob on marine life, tracking how the step change in temperature throws ecosystems out of whack.

The phenomenon of a patch of abnormally warm water off the west coast of North America gained notoriety in 2014, when the first such “Blob” was spotted and given that name, after the horror movie creature that devoured everything in its path. That first Blob lasted years, from 2013 to 2016. It has been blamed for slicing some forage fish populations in half; starving seabirds; triggering a collapse in cod; shifting tuna as far north as Alaska; pushing whales into the path of crab fishing lines and ships; and allowing exotics, including glowing tropical sea pickles, to arrive in northern waters.

In 2019, a second blob emerged. With record-warm waters appearing again this year, some scientists believe the 2019 event, known as Blob 2.0, may have just never gone away. If NEP20b is now big enough and hot enough, Leising says, it may do what the 2013-2016 version did, creating its own microclimate that perpetuates the heat, forcing the warm water to stick around for years yet to come.

While NEP20b appears to be starting to shrink, as of early October it was still a massive 6 million square kilometers and more than 100 days old, says Leising.