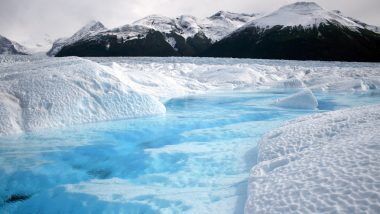 The Thwaites Glacier, often referred as the Doomsday Glacier, is an unusually broad and fast Antarctic glacier flowing into the Pine Island Bay, which is part of Amundsen Sea, east of Mount Murphy, on the Walgreen Coast of Marie Byrd Land.

The Thwaites Glacier is closely watched for its potential to raise sea levels. Climate scientists regard Thwaites Glacier as one of the most vulnerable and most significant glaciers in the world, when it comes to future global sea-level rise. Now, scientists warn of the rapid melting of ice of the doomsday glacier, threatening catastrophic seal-level rise. Its collapse could lead to rapid sea-level rise, the ramifications for most countries, including coastal cities, would be devastating.

Earlier this year, a team of scientists, for the first time, observed the presence of warm water at a vital point underneath the glacier, which helps explain the reason behind the extent of its decrease. The reason the Thwaites Glacier in Antarctica is described as the 'doomsday glacier', because of the catastrophe it could potentially create through a rapid rise in sea-level, following rapid melting in ice.