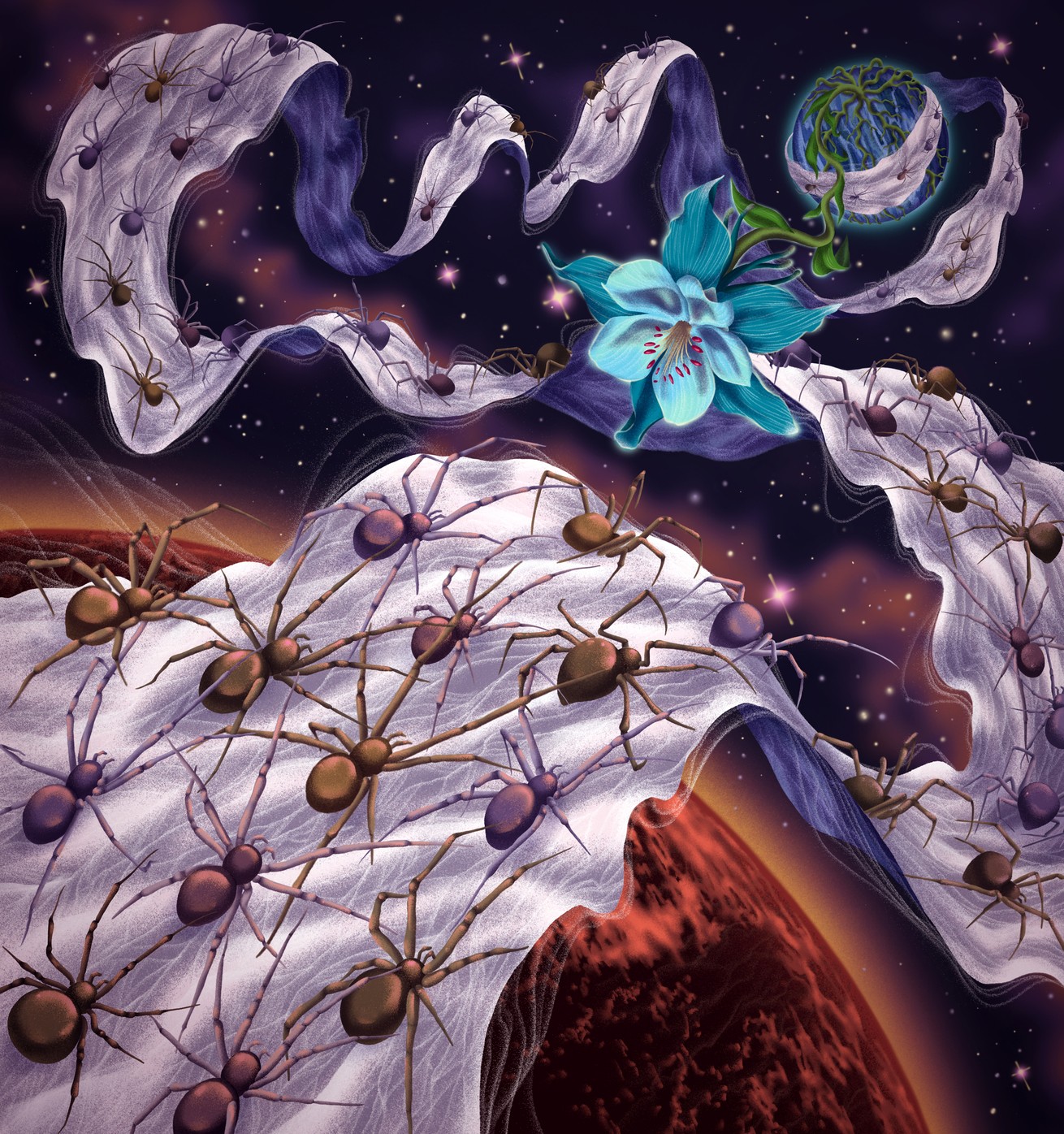 Lizards’ feet are morphing, squid are shrinking, rats’ teeth are getting shorter. What’s in store for us?

In june of this year, not long before the midwinter solstice, catastrophic floodwaters draining from the Gippsland Plain, in southeastern Australia, left in their wake an otherworldly phenomenon: Translucent spider silk, extending half a mile in some places, trailed over riverbanks, roadsides, and fields, rising into glistening spires atop highway signs and shrubbery. On once-humdrum stretches of road, drivers pulled over to stare, take pictures. When a breeze ran through the membrane, it rippled with the fluency of a tide surging in a mangrove swamp. Light trembled on the sodden turf beneath. How improbable that something so delicate, sensuous even, might remain after something so destructive.

To spot the creatures responsible, you would have had to draw close. Sheetweb spiders—constellations of them—clustered in a cosmos of their own froth and protein. A mature sheetweb is rarely bigger than a contact lens; the spiderlings are best made out with a magnifying glass. On days of ordinary weather, millions live in the earth, but when threatened by inundation, the spiders abandon their belowground niches. Each fashions a single thread, a streamer, to function as an emergency airlift. Lofted up by atmospheric currents, and possibly by electrostatic crackle too, the spiders sail on the tips of their lines toward higher terrain, alighting, in time, on fence posts or treetops or ascending farther still. In 2011, a pilot reported crossing paths with clumps of spiders at 2,000 feet. In a departure from habit—wingless as they are—the sheetwebs fly. The tracers of their mass decampment, a strand of silk for every spider, settle on a scale so vast, so uniform, the result looks less like the work of animals than like something mythological or architectural: a mysterious Christo at work, festooning the landscape.

The weather in Gippsland is changing, as is true everywhere. The variability of the region’s climatic extremes has become more pronounced since the 1960s: hotter hot spells, fiercer floods. Scientists foresee longer dry periods split by downpours of worsening severity. When sheetwebs appear, we would do well to view them as a premonition of a future we are failing to avert. That which elevates the spiders out of crisis—their ribbons of silk—attests to how deeply they are, in fact, enmeshed in a nature that grows more chaotic. Weaving is the way arachnids make themselves at home in the world, their webs functioning as dormitories, trip wires, and traps for prey. But as the sheetwebs spin silk to flee an inhospitable habitat, their webs are flotsam from an evacuation.

Though evolution has endowed these tiny asterisks of life with a flight instinct, and an ingenious strategy for extricating themselves from disaster, the spiders cannot stay aloft forever. When the sheetwebs drifted back down in Gippsland, that was not the end of their emergency. Not until after the waterlogged soil dried out did they shrink once more into their myriad hideaways. In countryside mauled by storms, with land submerged below rising rivers, we will see more of the spiders, it seems, for they cannot escape us. And should waters recede too slowly, they may be doomed. If we can set aside our anxious wonder, perhaps we may see in the sheetwebs’ adaptive resources, and their limits, the challenges that await in the quest to acclimate to crisis.