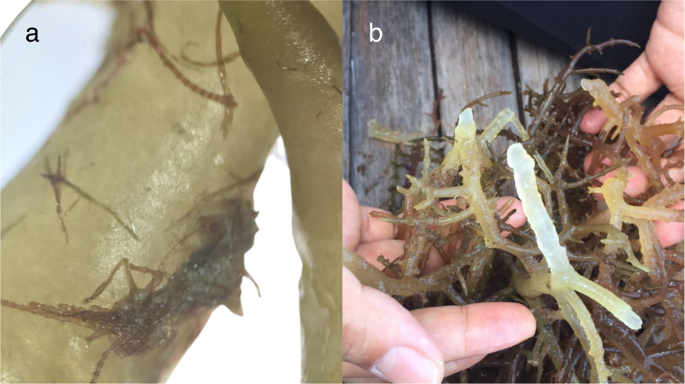 The rapid expansion and globalization of the seaweed production industry, combined with rising seawater temperatures and coastal eutrophication, has led to an increase in infectious diseases and pest outbreaks. Here, we propose a novel Progressive Management Pathway for improving Seaweed Biosecurity.

The rise of seaweed cultivation

Seaweed cultivation is rapidly expanding globally. The leading region for seaweed production is Asia, although other regions (i.e., South America, Africa and Europe) have increasingly begun to cultivate selected seaweeds in response to rising global demand for a wide range of products dedicated to human consumption, such as food, cosmetics, pharmaceuticals and nutraceuticals. Other uses include agricultural fertilisers, livestock feed, biofuels, biomaterials used, for example in food packaging, and more recently the capture of atmospheric carbon1.

Currently, seaweed production accounts for ~51% of total global marine and coastal aquaculture production by volume, equating to nearly 35 million tonnes2. Exponential growth of the seaweed industry, particularly in the last 50 years, resulted in the sector reaching USD 14.7 billion in 20192. Seaweeds are cultivated in over 54 countries worldwide2 at various scales, from less than one to many thousands of hectares3. The seaweed industry provides jobs to over 6 million farmers, predominantly in coastal communities in low and middle-income countries. These communities mostly sell their seaweed products to foreign, multi-national companies for processing and export3.

Problems derived from a lack of seaweed biosecurity guidelines

The rapid expansion and globalization of the seaweed industry, in combination with escalating climate change-related events, and a rise in eutrophication of coastal environments, has led to an increased prevalence of infectious disease and pest outbreaks4. The Philippines alone, recorded an income loss of USD 32 million between 2011–2012, due to seaweed disease outbreaks, such as Ice-Ice disease (IID) and epiphytic filamentous algae (EFA) (Fig. 1), poor quality cultivars (i.e., infected) and natural disasters5. In China, disease losses in Porphyrafarming alone reached USD 410 million in 20214. Similar economic losses across a broad range of seaweed species have also been seen in the Republic of Korea, Tanzania, and Indonesia3.

Research to identify seaweed diseases and pests, including viruses, bacteria, protists and eukaryotic endophytic algae, is ongoing6. However, we have only seen recent evidence of measures applied for seaweed disease prevention, treatment, and mitigation5,7. The control of grazers, epiphytes, and competing invertebrates, coupled with fouling algal outbreaks, which deter seaweed growth, is particularly difficult to manage. This is especially true for seaweeds grown under open sea conditions, as compared with land- or pond-based animal aquaculture production systems, where external conditions and hazards may be easier to mitigate8,9.

Our recent work has, however, proven the effectiveness of relatively simple biosecurity measures in Malaysia, such as the use of healthy, uninfected propagules, regular simple cleaning of the seaweed thallus and farm ropes to remove biofouling and early identification of infected stock. These measures significantly reduce the incidence of disease and epi-endophytes in red algal carrageenophytes Kappaphycus spp. throughout the entire cultivation period, improving both seaweed quality and market value8. In China, the use of bleaching powder or potassium permanganate is now routinely applied to the water supplies in seedling nurseries to prevent the growth of the main pathogenic microorganisms that are known to cause disease in the seedlings of the kelp Saccharina japonica10.

To date, primary international mechanisms for controlling exotic diseases associated with trade in aquaculture organisms and products (e.g., the Aquatic Code of the World Organisation for Animal Health (WOAH)) do not include those that impact seaweeds and aquatic plants, in that there are no international standards for the notification, diagnosis and control of diseases and pests significant to the seaweed industry. Without a clear mechanism for reporting these outbreaks from the local to the international level, they continue to occur largely under-reported in many countries. With no reporting mechanisms and evidence-based biosecurity measures in place11, producers typically either discard diseased and pest-infested crops into the surrounding water body or attempt to treat them using ‘unsanctioned’ methods, such as the use of inorganic fertilizers or biological growth stimulants, attempting to increase crop resistance to disease and epiphytes5.

In aquaculture, the lack of effective implementation and enforcement of guidelines on how to deal with infectious diseases and pests, in many cases, has led to the collapse of an industry at local and regional levels12. The international translocation of stock has also led to wider environmental concerns, particularly when invasive seaweeds and their associated diseases and pests have escaped and become established in the wild6. It is, therefore, important that the concept of biosecurity and the greater control of diseases, pests and wider environmental hazards, which can limit supply9, are incorporated into developing policies and practices. Such actions would protect the rapidly expanding seaweed aquaculture industry, both at national5,7,13 and international scales11.

Whilst the dominant seaweed-producing countries (i.e., China and the Republic of Korea) have introduced biosecurity measures that have been implemented by stakeholders, most countries lack even basic measures3. Re-emerging or newly emerging disease and pest challenges, therefore, continue to threaten the sustainable development of this global industry3. We have discovered that the main reasons for the lack of measures include: (i) minimal seaweed-specific biosecurity policies at a national and international level, with the exception of China and the Republic of Korea; (ii) lack of robust evidence-based biosecurity measures; and (iii) limited guidance for implementing these measures and for the designation of responsibility to ensure the measures are followed throughout the supply chain11. These reasons are further exacerbated by a lack of coherent biosecurity/ hazard management across the supply chain in all sectors of the aquaculture industry. Consequently, a single actor cannot be held ‘responsible’ for losses that may occur at any given stage in the chain9.