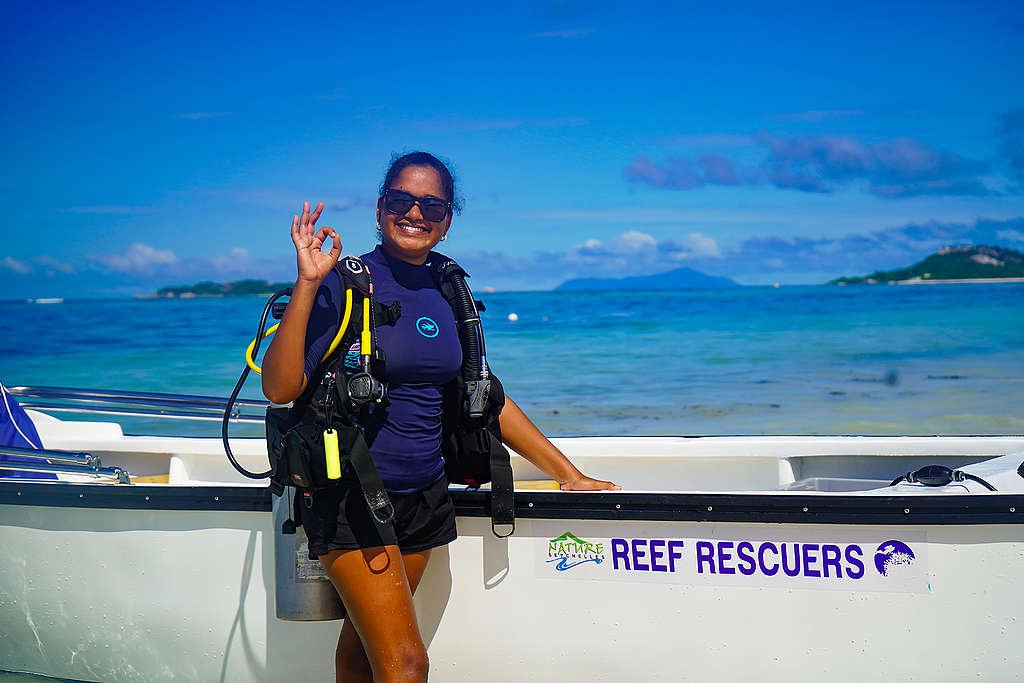 Vital Ocean Voices is a series of stories from people living in coastal communities around the Indian Ocean, providing first-hand accounts of the impacts of destructive fishing, pollution and climate breakdown.

Coral reefs in the Seychelles and the Western Indian Ocean (WIO) region have been destroyed by ocean warming and coral bleaching events. Seychelles is dependent on coral reefs for healthy oceans, as well as for fisheries and tourism, both the main pillars of its economy. A decade ago, an ambitious ground-breaking coral reef restoration project was started in Seychelles by local NGO Nature Seychelles. It has made remarkable progress by raising thousands of coral fragments in underwater nurseries and transplanting a degraded reef with these in the marine protected area (MPA) of Cousin Island Special Reserve.

25-year old Athina Antoine has been a part of the Nature Seychelles’ Reef Rescuers team since 2017. She was fresh out of the Seychelles Maritime Academy when she began working on the project in 2017. A marine engineering graduate, she had no previous coral restoration experience. But she had the enthusiasm and drive to learn. Today, she’s confident and self-assured and proud of the achievements made by the Reef Rescuers.

Like most Seychellois, Athina has spent a lot of time on the water. “I started swimming when I was very little,” she says. “At age 16, I started diving. So when the opportunity came up to join a team of coral restoration specialists as a technical assistant, I jumped in – feet first, head later. I had no marine biology qualifications, and up to that point, I had no idea how important coral reefs were. But I wanted to find out.”

A typical day for Athina starts at 8 am. We caught up with her on Praslin, Seychelles’ second largest island where the Reef Rescuers are based at their aptly named Centre for Ocean Restoration Awareness and Learning (CORAL) building. Alongside restoration specialists Luca Saponari and Roshni Yathiraj, she is preparing to set out for Cousin Island Special Reserve, the site for their project.

For the past week, the team has kept watch on the weather after unexpected rain lashed the island for several days affecting visibility and making it difficult to dive. Fortunately, it’s bright and sunny today as the team loads up their gear onto a truck and prepares to set out.

In the water, Jacques, their boat skipper patiently waits to ferry them to the nursery site. Time is of the essence and everyone quickly jumps off the truck and starts carrying dive gear and other equipment to the boat. Soon after, the small boat cuts through the water towards Cousin.