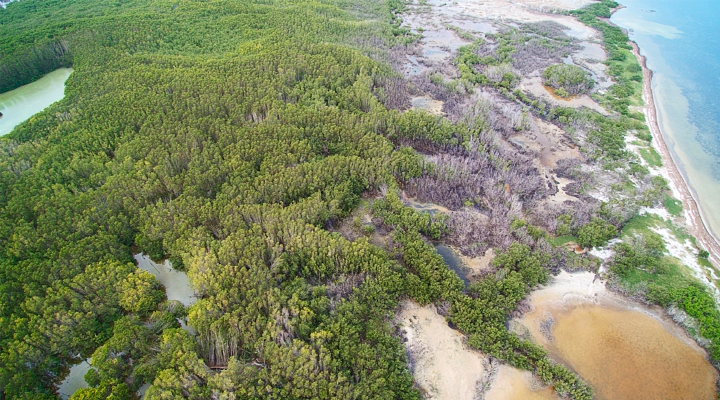 Central America experienced one of its most intense hurricane seasons in 2020.

Two major hurricanes and a handful of other late-blooming storms took many lives, displaced hundreds of thousands of people, and caused billions of dollars in economic losses. The storms also left severe scars on the landscape, particularly in some mangrove ecosystems.

Mangroves are networks of hardy trees and shrubs that typically grow in coastal wetlands. They are valuable because they help prevent coastal erosion, absorb carbon from the atmosphere, and provide habitat for fish and other marine animals. But recent hurricane seasons in Central America and Mexico have threatened some of these vulnerable wetland forests. Using satellite data and drone imagery, scientists from NASA and other international institutions have been evaluating mangrove damage from the 2020 hurricane season.

“Extreme events in the Caribbean are not new, but we are seeing more of them in recent years,” said Rosa Roman-Cuesta, a tropical forest ecologist at Wageningen University (The Netherlands). “We are trying to understand how coastal systems are responding to these events. That’s why studying the effect of the 2020 mega-hurricane season is important.”

Roman-Cuesta said the type of hurricane damage has evolved over the years. In years past, she explained, hurricane winds typically caused most of the mangrove damage by uprooting trees, defoliating entire areas, and blocking drainage to the ocean. But in recent years, storms have been rapidly intensifying and stalling more often. The result is extreme precipitation and flooding that affects oxygen concentrations in soils and hinders photosynthesis for mangroves. Large storm surges also physically damage the trees.