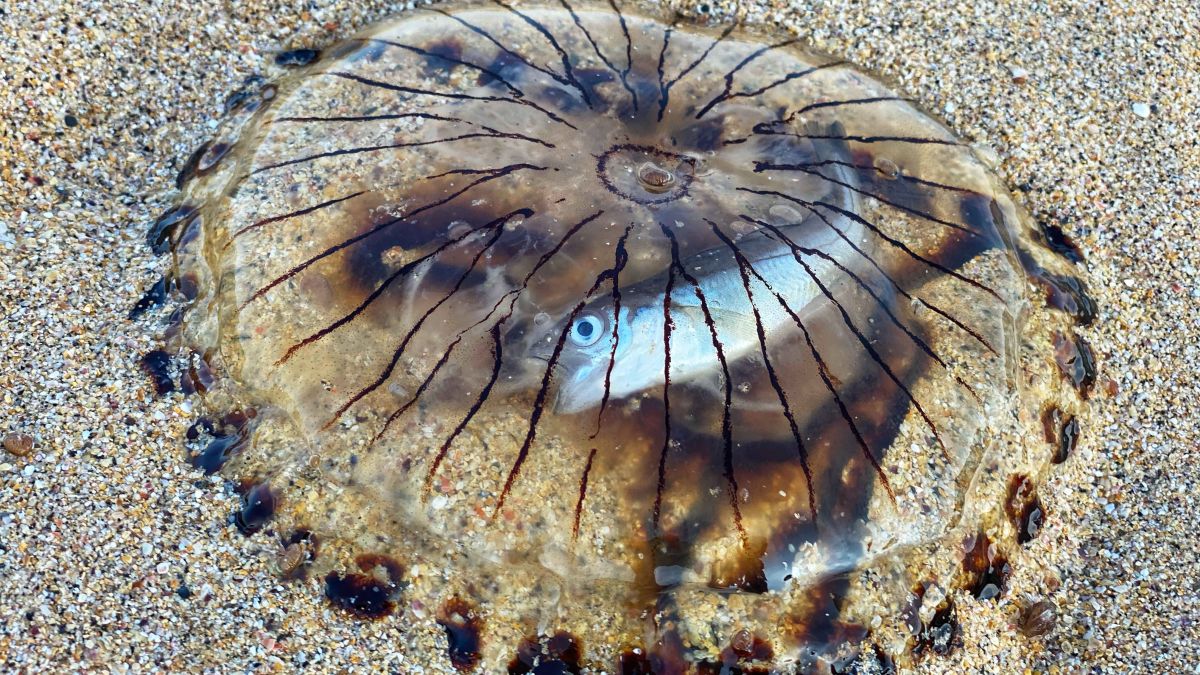 From tangled coral to Amazon river monsters, here are some of the strangest things that were carried to the shore this year.

Beaches across the globe saw their share of weird blobs wash ashore. Sometimes this shoreline debris was small and weird, like a tangled rope coral that found its way onto a beach in Texas, or the tar balls that dotted Israel's Mediterranean coastline in February. Other times, the organisms numbered in the millions, such as the by-the-wind sailor jellyfish whose corpses stranded across shores; and in other instances, the beached animal itself was a behemoth, such as the rotting body of a nearly 10-foot-long (3 meters) "river monster" spotted near the Gulf of Mexico this year. Here's a look at the wild and strange "things" that washed ashore in 2021.

Every year, millions of by-the-wind sailor jellyfish (Velella velella) wash up and die on beaches around the world. These jellies float near the top of the ocean, and have a little sail on their backs that catches wind and pushes them from one feeding ground to the next. When wind patterns change with the seasons, huge colonies of the jellies can end up stranded on the shore. Sometimes, those colonies include thousands of individual jellies; other times, they include millions.

Why are some Velella stranding events so much more massive than others? A study published in March 2021 found that the biggest stranding events occurred in years with record high ocean surface temperatures, driven by a phenomenon known as "the blob." The blob warms surface waters in the Pacific Ocean, fostering larger colonies of Velella at sea; when the winds change, those massive colonies end up on shore, littering beaches with millions of jelly carcasses. This trend of mass die-offs will likely continue as global warming escalates over the coming decades.

Read more: Millions of dead jellyfish are washing up around the world. 'The blob' could be to blame.

A juvenile killer whale was heroically rescued in January after getting stranded on a Scottish beach. A group of trained medics from the British Divers Marine Life Rescue (BDMLR) and helpful locals carried out the rescue on Sanday, an island off the coast of Scotland. After determining the animal was healthy and old enough to survive on its own, they managed to get it off its side and onto a special dolphin stretcher. It took eight people to lift the 11-foot-long (3.4 meter) orca into deeper water. Then, it suddenly headed off and was never seen again.

The entire rescue took just over an hour, but BDMLR area coordinator Neave-Webb, who led the rescue, believes it was only possible because of the team's newly acquired dolphin stretcher and the help of the locals. "It was a lucky animal to strand on an island with people who knew what they were doing and had the equipment to save it," she told Live Science. "It definitely chose the right place to throw itself on the beach."

A male basking shark measuring 26 feet (8 meters) long washed up on the coast of Bremen, Maine in January, stunning local fishermen with its pickup-truck-sized body. Basking sharks live in warm waters across the world, and are the second largest fish in the sea; Only the elusive whale shark, which measures up to 60 feet (18 m), is longer. Despite their formidable size, basking sharks are harmless to humans. They mainly prefer to cruise through the water with mouths open, filtering tasty zooplankton and tiny invertebrates through their complex gills. As for the Bremen shark's cause of death? Marine researchers still aren't sure.

Read more: A truck-size shark washed up on a Maine beach. How did it die?