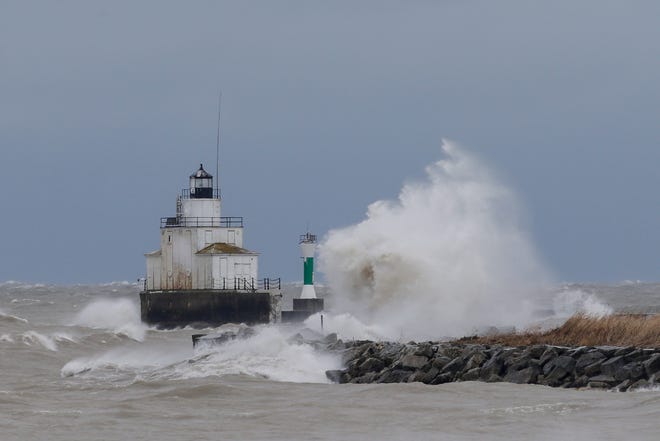 WI - A changing climate could cost Great Lakes communities billions. Here’s what's being done about it.

The ferry — a historic steamship that brings people, cargo and vehicles between Manitowoc and Ludington, Michigan, each summer — had to delay its sailing season until the dock was repaired months later.

MANITOWOC - On April 14, 2018, a rare spring snowstorm whipped Lake Michigan into a frenzy.

In Manitowoc, a city of 32,000 people about 80 miles north of Milwaukee, the wind and waves of the storm combined to twist metal and crack asphalt, resulting in more than $1 million in damages to the dock of the SS Badger Lake Michigan car ferry.

The ferry — a historic steamship that brings people, cargo and vehicles between Manitowoc and Ludington, Michigan, each summer — had to delay its sailing season until the dock was repaired months later.

Many cities near the Lake Michigan coast have experienced similar weather events in recent years as storms become more frequent and more violent amid a changing climate.

Results from a survey of 241 municipalities in the Great Lakes Basin show coastal damage from climate change in these regions will cost at least $1.94 billion over the next five years.

Those same communities have already spent $878 million on coastal damages over the past two years.

The Great Lakes Basin in the U.S. is home to approximately 23 million people. Wisconsin alone has more than 800 miles of Great Lakes coastline. More than a third of Wisconsin’s population lives in the 11 counties that form the coast of Lake Michigan.

Cities along the Lake Michigan coast are already feeling the pull on their purse strings.

During the April 2018 snowstorm, high winds and heavy waves damaged loading equipment, structures and severely eroded the harbor side of the dock facility in Manitowoc, which is owned by the city and leased by the SS Badger.

Repair costs to the dock in Manitowoc topped $1 million. The repairs were partially funded by an emergency grant from the state of Wisconsin.

More recently, the city of Sheboygan announced a $10 million project to reinforce a major sewer line running along the shore that has been exposed by erosion caused by Lake Michigan’s rising water levels and winter storms that have gotten more intense.

The Sheboygan sewer line carries nearly 50% of all of the sewage going to the city’s wastewater treatment plant, including most of the city of Sheboygan’s sewage as well as some from the town of Sheboygan and outlying areas.

According to data from the National Oceanic and Atmospheric Administration, the water levels in Lake Michigan were 3 feet lower in 1930 when the Sheboygan sewer line was built than they are today.

The city of Sheboygan plans to use funds from the American Rescue Plan to pay for the expense, but without those funds, the city would have had to borrow the money and customers would have seen their sewer bills rise by more than $67 per year.

According to the U.S. Environmental Protection Agency, the “cost of adapting urban storm water systems to handle more intense and frequent storms in the Midwest region could exceed $480 million per year by the end of the century.”

The EPA also estimates the Midwest region, including Wisconsin, will likely bear the brunt of expected damages to infrastructure, which could reach $3.3 billion per year by 2050.

The Great Lakes Integrated Sciences and Assessments team through NOAA estimates that investing in preparedness and adaptation avoids $4-$11 of damage for every $1 invested.