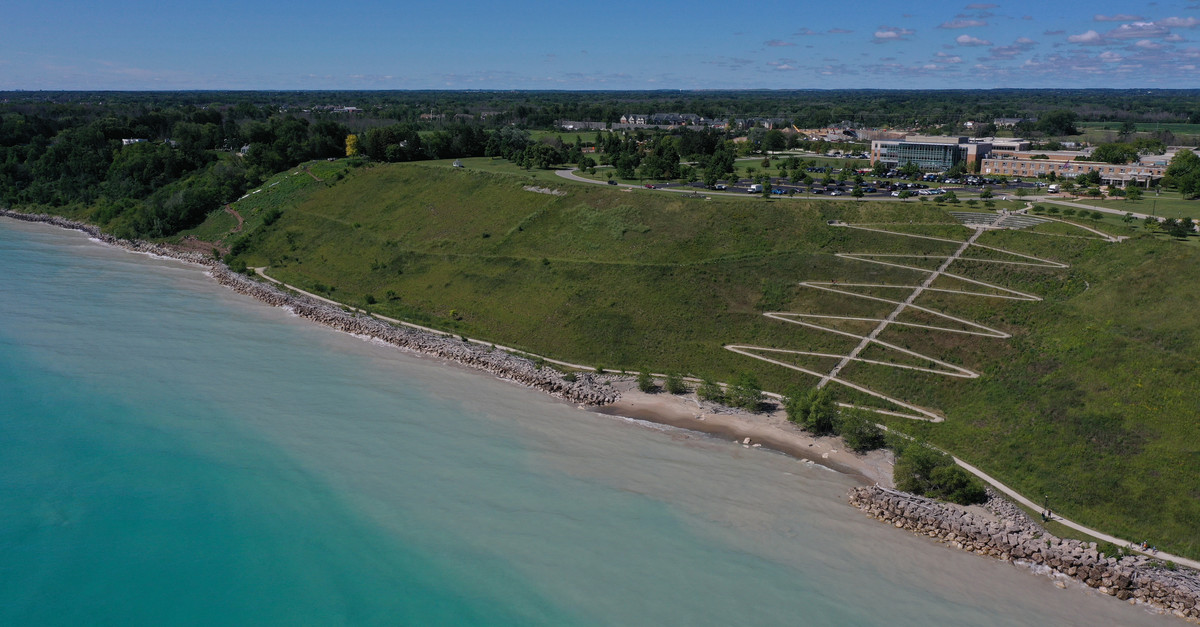 In 2007, the Concordia University Wisconsin, in Mequon, Wis., finished fortifying a 130-foot bluff and building a 2,700-foot-long rock wall to buffer waves. The $12 million project was among the largest built along Lake Michigan in Wisconsin. Neighboring landowners soon noticed changes to their property.

The project has accelerated erosion on downstream properties from around 9 inches to more than 7 feet per year.

But that priceless view may cost Spector more than he could have imagined as ongoing shoreline erosion edges his house ever closer to the bluff’s precipice and crashing waves below.

Spector, who works in real estate, knows it’s only a matter of time until the bluff gives way and his home will be gone.

"It’s such a beautiful view. It makes up for some of the heartache," he said.

The Great Lakes collectively hold 20 percent of the world’s surface fresh water, and Lake Michigan is the second-largest of those lakes by volume.

The Spector property, about 20 miles north of Milwaukee in Mequon, occupies a hotspot for bluff erosion. Wind and waves whittle away at the base of the bluff, knocking soil loose and shaving off portions of Spector’s backyard. Ten years ago, the house stood 50 feet away from the bluff’s edge. Today it’s less than 10 feet away.

While the elements leave the area particularly prone to erosion, Spector and many of his neighbors say the real problems started after 2007, when Concordia University Wisconsin, a nearby private institution, built a 2,700-foot-long rock wall to protect its own beach and bluff. Experts say the $12 million project is one of the largest seawall structures on Wisconsin’s Lake Michigan shoreline.

But while the wall protected the university, its neighbors almost immediately saw their own beaches begin to wash away. Much of the bluff, once a gentler slope, became a sheer vertical face as yards of their properties tumbled into the lake. Neighbors complained to the university, and two couples sued. Spector’s home was one of the properties at the center of that lawsuit, although the case involved the prior owners, not Spector.

A jury later agreed that Concordia’s construction caused "significant harm" to properties, but the university was not negligent. The jury awarded no damages, leaving bitterness over the seawall to linger in the neighborhood. Concordia did not respond to a request for comment.

Erosion concerns and battles over seawalls span the Great Lakes and the globe, notably in Hawaii, where the islands of Oahu, Maui and Kauai have lost an estimated 25 percent of their sandy beaches with seawall construction fueling the losses. In Australia, the construction of a nearly 25-foot-tall wall to protect properties along the beach sparked intense pushback from community members who argued it would do more harm than good by washing away sand in front of the concrete structure.

Experts worry about the long-term effects of shoreline armoring while describing the practice as a short-term maneuver that benefits those who are fastest to build.

Revetments, a kind of seawall, are typically sloped, stacked rocks meant to buffer the beach against the impact of waves. But they can also affect downstream properties — making adjacent beaches deeper while blocking the natural movement that would otherwise replenish them.

The construction of one wall can kick off a domino effect with consequences for beaches down the shoreline. Damage from one revetment can cause neighbors to armor their shoreline, which can damage the next beach, said Guy Meadows, a professor at Michigan Technological University and director of its Marine Engineering Laboratory.

Chin Wu, a professor in University of Wisconsin-Madison’s Department of Civil and Environmental Engineering, has studied the issue for years. In 2014, Wu wrote an article published in the Journal of Great Lakes Research that found Concordia’s revetment worsened bluff erosion on the south side of the project, the same direction the current travels.