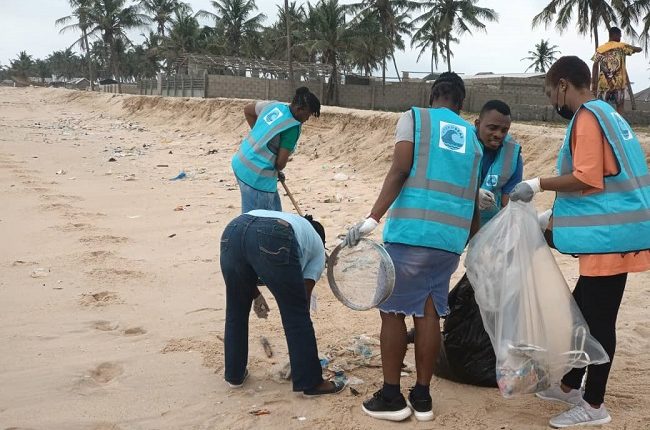 Nigeria has a lot of beaches adorning its coastal area. Apart from being a natural resource, these beaches are also of economic importance to the country.

They don’t just add beauty to the coast and provide habitats for many creatures like craps, sea turtles and marine mammals, they also provide services to people and property that have an economic value.

However, a trip to some of these beaches has revealed various forms of environmental abuses and degradation going on in the nation’s coastal areas.

Apart from erosion, major abuse of coastal areas is the indiscriminate littering of the beaches with all forms of debris, cellophane papers/ bags, pet bottles and plastics.

It is on this note that the group of conservationists/ environmentalists, who converged on the popular Eleko Beach in Idado, Lagos State on the occasion of the 2022  International Coastal Clean-up Day, are calling on the government and other stakeholders to put in place stricter measures for the protection of the nation’s beaches and coastal area.

They also canvassed for increased advocacy within coastal communities on the need to keep the environment clean, pointing out the danger of plastic waste to the marine environment.

The high point of the day was the clean-up of Idado Eleko Beach by the teams of volunteers, in which nothing less than 50 bags of trash were gathered.

Speaking during International Ocean Clean-up Day with the theme, ‘Sea the Change’, Conservation Director of the Marine and Coastal Conservation Society, Mrs Oyeronke Adegbile, said the gathering was all about removing trash from the waterways and beaches, either as individuals or as a large group.

According to her, the level of plastics on most beaches has been known to be affecting marine animals such as craps, sea turtles and fish.

“So, we need to see the change in our beaches in order to save these creatures. We know that plastic either in the form of digested plastic impaired marine lives,” she said.

She pointed out that though there have been slight changes in the way people litter the beaches, the advocacy must continue until people, who are in the rural areas and coastal communities are fully sensitised.

She pointed out that the problem of not segregating waste from the household is still a problem, noting that the way people put the waste together is still a challenge.

She also stated that the country still has a long way to go in the area of recycling, making a case for the location of waste collection centres in low-income communities for ease of collection and disposal.
https://tribuneonlineng.com/conservationists-seek-stricter-measures-for-beaches-coastal-area-protection/