International
TV viewers can enjoy some of the finest sections without leaving the comfort of their sofas. Credit: ITV 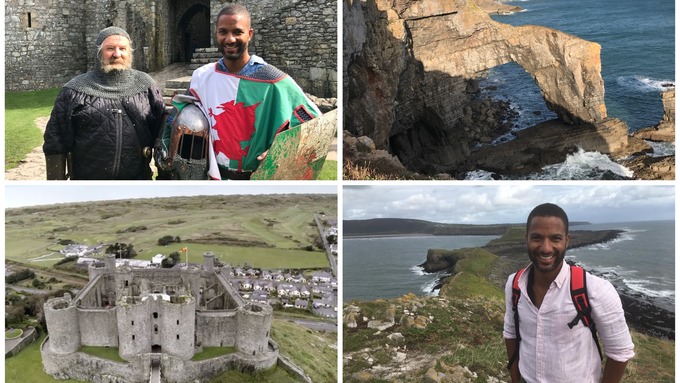 It is a hot summer afternoon. As the sun beats down on the glistening Irish Sea, TV presenter Sean Fletcher is working up a sweat.

He is walking up Mynydd Enlli on the magical Welsh island of Bardsey. With him are two new companions, Island warden Hannah and her pet donkey Chico.

It is one small part of an epic journey to visit some of the amazing places along the 870 miles of the Wales Coastal Path.

Wales is the only country in the world to have a continuous path that stretches around its entire coastline. And now TV viewers can enjoy some of the finest sections without leaving the comfort of their sofas.

ITV Cymru Wales is broadcasting Wonders of the Coast Path, a six-part series, presented by Sean from 8.30pm on Monday 27th April.

Says Sean: “I’ve got my favourite spots on the Welsh coast that I go to, but there’s always been a little part of me that’s thought, ‘do you know what, it’d be great to walk the coast path.

“It’s an amazing thing to do. I’ve discovered four thousand year old sunken forests, eaten oysters fresh off the beach, stargazed under the darkest night skies and walked on deserted beaches that would rival anywhere in the world.

“I didn’t realise how many gems there are - and they’re not hidden gems, they’re all out there and it’s on our doorstep.”

10. Dolphin spotting at New Quay -- Cardigan Bay is home to Europe’s largest population of Bottlenose Dolphins. Look out to sea from the harbour or coast path and you may just spot one.

8. Harlech Castle --Like a scene out of a movie, Harlech’s battlements spring out of a near-vertical cliff-face.

6. Menai Strait -- Walk the shores of this beautiful saltwater ‘river’ that separates the island of Anglesey from the mainland. Cross the Menai Suspension Bridge for amazing views.

5. Black Rock and the Lave Netters -- At Black Rock, just east of the Prince of Wales Bridge, you can discover the history of the local Lave Netters who still fish in the raging tidal water of the Severn Estuary.

3. Stargazing at Uwchmynydd -- Perched on the very tip of the Llŷn Peninsula, Uwch Mynydd is regarded as one of the best places in Wales to see the starry night skies and the Milky Way.

1. Surfing off the Llŷn Peninsula -- With its volcanic hills - breathtaking beaches - and wonderful wildlife, this is Wales’ Land’s End. It’s quiet beaches also have some of the best surf in Wales.