Pacific Northwest
A beach walker traverses the tide flats within the city’s easement across the Ebb Tide beach. (Photo by Larry Vogel) 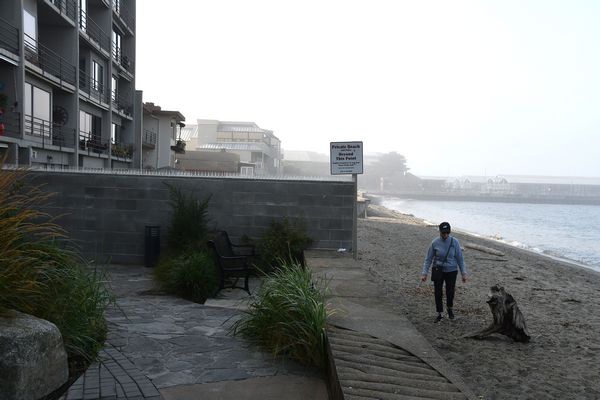 The legal maneuvering continues regarding how the City of Edmonds may use its existing easement across the private beach owned by Ebb Tide condomiums. Attorneys for the Ebb Tide Homeowners’ Association have filed a motion with the Washington State Court of Appeals to reverse last month’s Superior Court decision that would allow the City of Edmonds to build an elevated walkway across the easement.

The dispute has been in the courts since 2017 and has so far involved more than 300 separate legal filings that include motions, declarations, rulings and orders  — all aimed at asking the court to determine whether the easement will allow the proposed elevated walkway. All documents are available to the public from the Washington State Digital Archives.

The Ebb Tide is located adjacent to Railroad Avenue at 200 Beach Place between the Edmonds Waterfront Center and Olympic Beach Park. The property stretches from Railroad Avenue on the east to Puget Sound on the west. Ebb Tide has traditionally maintained the tide flats west of the building as a private beach for the exclusive use of condominium residents and owners.

The aim of the proposed $1.3 million elevated walkway is to connect the two existing sections of the Waterfront Promenade, a public walkway maintained by the City of Edmonds, thereby creating an uninterrupted public footpath linking Marina Beach Park and Brackett’s Landing Park. Closing this “missing link” was identified by citizens as a high-priority project during the public involvement phase leading up to the 2022 update of the city’s Parks, Recreation and Open Space (PROS) Plan.

Built in 1965 by Wylma and Lloyd Nelson, 12 years after the last shingle mill closed on the Edmonds waterfront, the five-story, 20-unit residential building offers its residents beachfront living with 180-degree water views. From the outset, a major attraction was exclusive use of the private beach stretching west from the building’s patio area to Puget Sound and between the building’s north and south property lines.

The Ebb Tide units were rented as apartments until 1983, when the building was sold by the original owners to Olympic Properties, Inc. and converted to condominiums.

With the demise of the waterfront mills in the 1950s, the City of Edmonds gained control and ownership of the beach areas to the north and south of the Ebb Tide’s private beach. But it would take another decade for the city to begin showing interest and taking action to designate and develop the beach and waterfront for parks and public use. (See the My Edmonds News story about 1960s-era Edmonds Parks Board member Bill Phillips and his efforts to acquire rights from the various mill interests to develop waterfront parks here).

In November 1983, the City of Edmonds and Olympic Properties signed an agreement that created a 10-foot-wide, 100-foot-long easement across the Ebb Tide’s beach, for which the city paid Olympic Properties one dollar (see original easement document here). The easement allows beach users to walk between the sections of public beach to the north and south of the Ebb Tide by crossing the tide flats. Ebb Tide has erected signage on the easement’s north and south borders, warning walkers not to trespass on its private beach, directing them instead to use the easement.