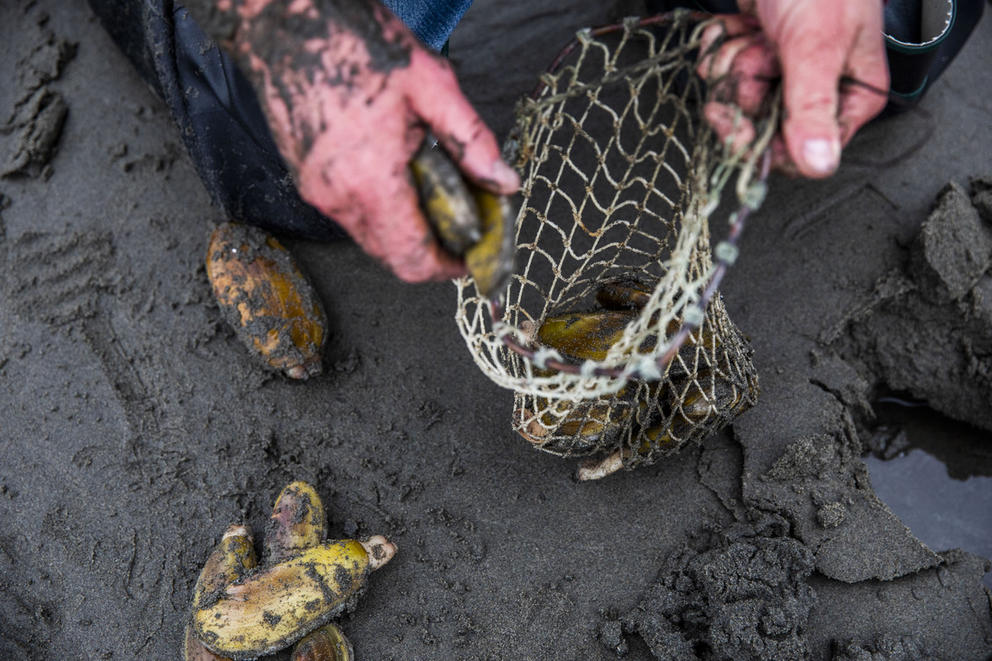 For thousands in the state, razor clamming represents culture and heritage. But state and tribal agencies are trying to protect people from harmful toxins.

Andi Day was just 6 years old when someone snapped a photo of her holding a lantern against the inky night as her grandfather knelt to dig out a razor clam on a sandy Washington beach. He had picked her up after school so she was still in her dress uniform, bundled in a warm winter coat to guard against the cold breeze.

For Day and thousands of other Washingtonians, razor clamming isn't just a fun weekend activity — it's their culture and their heritage. It even predates the arrival of European settlers. Native communities have been harvesting clams and crabs on these same beaches since time immemorial.

"I think one of my most cherished possessions actually is a clam gun that my grandfather made for my grandmother," says Day, now 53. "It's like this family heirloom. And it's just been handed down and we repair it and keep using it."

Each season, diggers wait in anticipation for Washington Department of Fish and Wildlife managers to count the number of clams on the beach. This determines how many are available for harvest and, ultimately, how many digs will be scheduled at each beach. Last year, diggers were thrilled when technicians counted the densest numbers of razor clams ever recorded, says Dan Ayres, the coastal shellfish manager at the Washington Department of Fish and Wildlife. After a long spring and summer cooped up by the pandemic, people were ready to get out for this socially distanced family activity. Instead, they received a slap in the face: The season was quickly shut down  after roughly a month and a half because of unsafe levels of toxins in the clams from a harmful algal bloom on the Pacific coast.

The culprit toxin was domoic acid, which causes amnesic shellfish poisoning. It's a neurotoxin that causes everything from memory loss to brain damage, and it can be fatal. There is no known antidote. It's produced through a dominolike chain of events: Warm water offshore causes a type of microscopic marine diatom called Pseudo-nitzschia to bloom. It then wafts silently over clam beds, delivering doses of domoic acid into the water. The clams filter it out of the water while feeding and store it in their bodies. Other marine organisms, including Dungeness crabs, then eat the clams, making the crabs toxic, too. (Because neither crabs nor clams have central nervous systems, they can’t be harmed by domoic acid.)