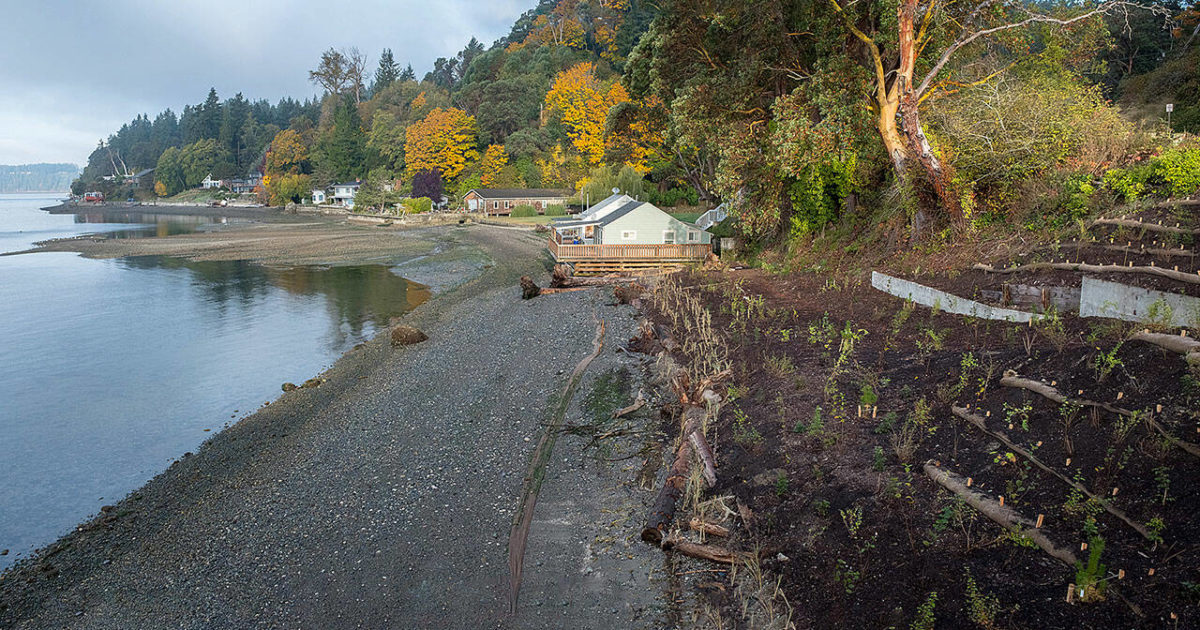 This beach restoration is a cooperative effort between King County, the Washington State Ferries (WSF) and the Washington State Department of Ecology. The long-range plan is to establish natural beaches to help restore salmon runs in Tahlequah Creek and to restore the creek to its original state.

The creek, which now passes through a bulkheaded and concrete flume, presents barriers to fish attempting to reach the spawning areas along the upper reaches of the creek. The beach surrounding the mouth of the creek, which was originally mudflats and marsh, is now heavily armored with bulkheads and backfill.

This area was originally named Qʷu?ali (place of gathering) by the sx̌ʷəbabš Native People of Vashon. The village here was a small village compared to the larger villages in Quartermaster Harbor, but it was a location rich in marine resources, with easy access to fishing and hunting sites, and close to the related villages in what is now Tacoma and Gig Harbor.

We do not know how long the village at Tahlequah was here, but Native People have inhabited Vashon for at least 4,000 to 6,000 years, with approximately a thousand residents at the time of the first European contact in 1792.

The first account we have of Clam Cove, now known as Tahlequah, comes from Lt. Georges Colvocoresses of the Wilkes American Exploring Expedition. His name was shortened to “Colvos” by his companions and Colvos passage is named after Colvocoresses.

On the evening of May 10, 1841, when the Expedition anchored at the south end of Vashon, Colvocoresses wrote: “At sunset, we came to under the western shore to wait for daylight. It was a rich treat to behold the sublime prospect around us through all its transitions of sunshine, purple hues, mellow twilight, and every shade, until there was nothing else to see but the dark loom of Mts Rainer and Olympus, uplifting themselves against the clear and starry skies of this region.”

American settlers named it Clam Cove because of the abundant clams found here and began to live here in the 1880s. In 1868, 633 acres at Dalco Point were declared a military reserve as part of a plan to build three defensive forts to protect the entrance to Southern Puget Sound at the Tacoma Narrows. The forts were never built and in 1921 the reserve was broken into 10-acre parcels and sold to the 52 squatters who had inhabited the land.

In 1918, Pierce County built a dock at Point Defiance for a proposed ferry to Gig Harbor and Vashon. Pierce County received a promise from the King County commissioners to build a dock and road to the south end within one year. On May 15, 1920, the Tahlequah-Point Defiance-Gig Harbor ferry service began with a celebration attended by 300 people. The ferry, City of Tacoma, was the first ferry and the fare was 5 cents.