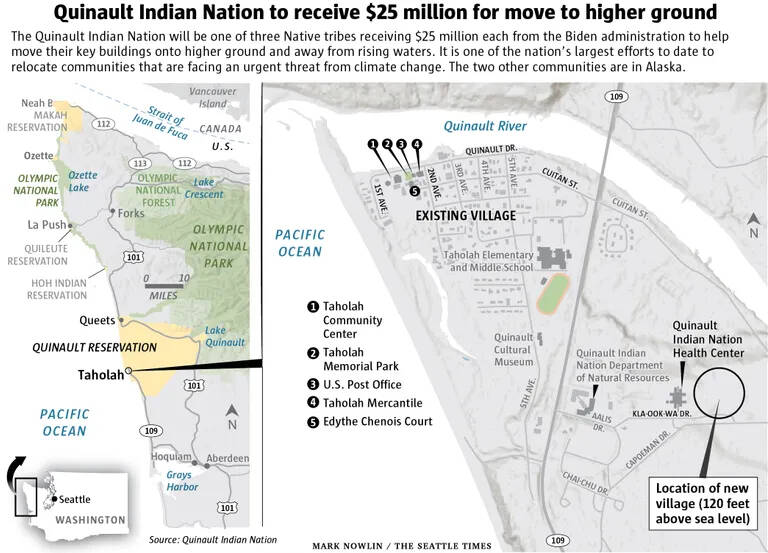 In the effort to move a village uphill, away from a threatening sea, the Quinault Indian Nation has received a momentous financial push.

The U.S. Department of the Interior announced Wednesday the commitment of $115 million to assist 11 tribal communities, specifically those threatened by climate change-related impacts, with relocation and adaptation planning efforts.

The money comes from both the Bipartisan Infrastructure Law and the Inflation Reduction Act, and will be implemented as part of a new Voluntary Community-Driven Relocation led by the Department of the Interior.

“Out here on the coast, we are at ground zero,” Capoeman said in an interview with The Daily World. “The tsunami that could come ashore, the rising tide, there are all of these things that could happen.”

For over a decade, the tribe has planned to relocate the village of Taholah — home to roughly 660 residents — beyond the flooding zone and tsunami inundation areas. Taholah is sandwiched between the rising waters of the Pacific Ocean and the Quinault River, which floods periodically during winter months.

The Quinault newspaper The Nugguam reported in September the tribe had broken ground on the Northeast Neighborhood in an initial phase of relocation. However, much of Taholah’s important infrastructure — the community center, police department, jail, courthouse and schools, among others — is still in the lower village, Capoeman said.

Capoeman said specific uses for the most recent grant are still to be determined, but it could help relocate “key buildings.” This $25 million won’t pay for relocation in its entirety, Capoeman said, but “this gives us a darn good start.”

The most recent grant will also allow for further collaboration between the tribal communities and federal government.

In December, representatives from the Department of the Interior and partnering federal agencies will travel to the three communities to “establish formal relationships and begin the planning process,” according to a news release. Community relocation will then be staged in the coming years.