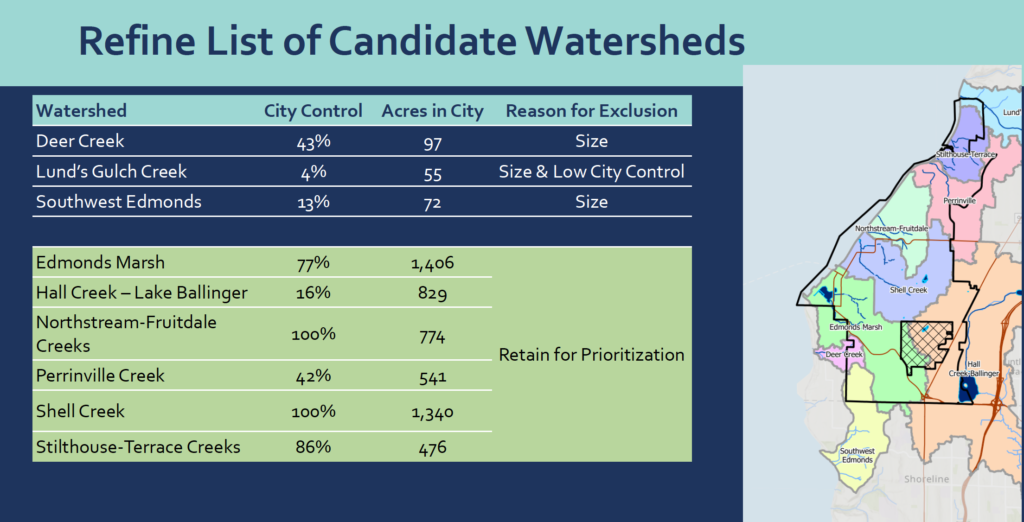 WA - Prioritizing a watershed for managing stormwater: Council committee get an update

Stormwater — and steps required for the city to manage it and stay in compliance with state and federal requirements — was a major discussion point for the Edmonds City Council’s Parks and Public Works Committee virtual meeting Tuesday night.

Why does managing stormwater matter? The Center for Watershed Protection defines stormwater runoff as “rainfall that flows over the ground surface. It is created when rain falls on roads, driveways, parking lots, rooftops and other paved surfaces that do not allow water to soak into the ground.”  Stormwater runoff, the center says, “is the number-one cause of stream impairment in urban areas.”

The City of Edmonds has a National Pollutant Discharge Elimination System (NPDES) permit. The Washington State Department of Ecology manages the permit, which is on a five-year cycle. The state of Washington has two main categories of stormwater permits: Phase 1, for jurisdictions with a population of over 100,000 and Phase II, generally those over 10,000 population. There are 88 Phase II permittees in Western Washington.

For the past year, the city has been working to develop a Stormwater Management Action Plan (SMAP) that includes a water health assessment, selecting a priority watershed and developing an implementation plan. Earlier this year, the city hosted two virtual workshops — with a total of 10 people attending — along with a story map and survey that drew 23 responses.

Rebecca Dugopolski of Herrera Environmental Consultants, which the city hired to oversee the plan’s development, explained that the city completed the required water health assessment at the end of March 2022; now the focus is on selecting the priority watershed. The Department of Ecology requires that the watershed be selected by the end of June.

The intent of the process, she said, is “to find that basin where you can have the most bang for your buck and then direct resources toward that to start getting projects in place and see those water quality improvements.”

While there are many watersheds in the city that could benefit from that process, the city had to prioritize one of them, Dugopolski said. The final choice —  Perrinville Creek — was picked from a list of nine candidate watersheds that was narrowed to six, and then four, before being selected.

Among the factors used to evaluate the candidates: What percentage of the watershed’s jurisdiction was under Edmonds’ control, social equity, public feedback and whether it promotes other plans/projects.

Of the first nine watersheds to be considered, three — Deer Creek, Lund’s Gulch Creek and Southwest Edmonds — were eliminated mainly due to the relatively small amount of acreage in the city. “The goal here for Ecology was a basin size of one to 20 square miles, which starts at about 640 acres,” she said, although Dugopolski later noted that the chosen watershed — Perrinville — was slightly smaller than that  — 541 acres.

In the next phase, the consultant and city staff looked at three factors: water use importance including things like public recreation access, whether there were any wellhead protection areas, presence of fish and pocket estuaries; development and growth, including the current percentage of paved impervious area; and water quality and habitat, including water quality impairments and concerns documented in local studies and fish passage criteria.