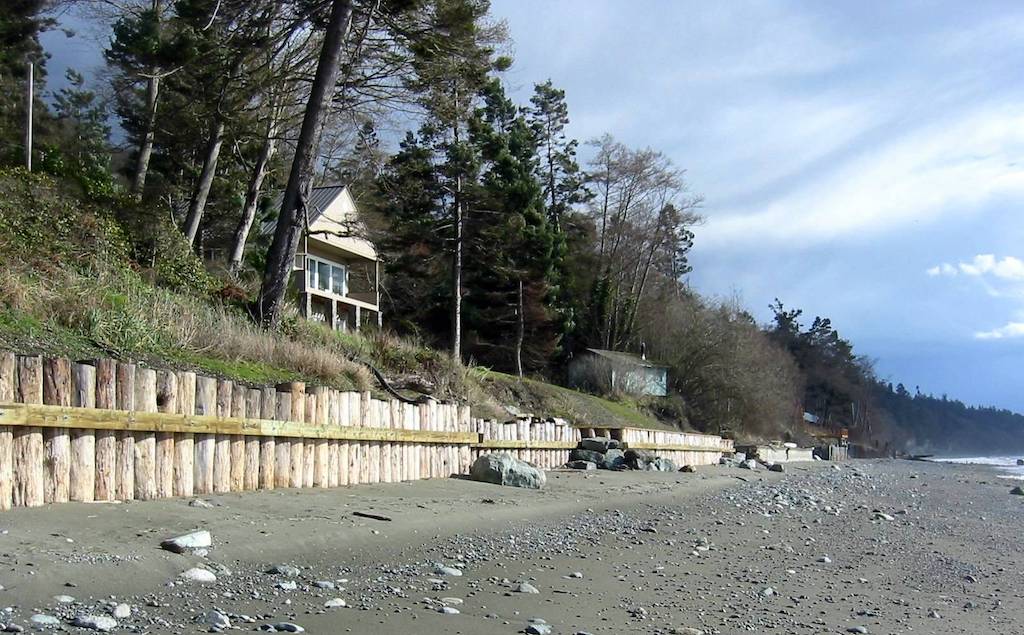 WA - Is shoreline armoring becoming a relic of the past?

Close to 30% of Puget Sound's shoreline is armored with seawalls and other structures meant to protect beaches against rising tides and erosion. But science increasingly shows that these structures are ineffective and cause significant harm to salmon and other creatures. State and federal agencies have been encouraging private property owners to remove armoring in a race to improve habitat, but why did so much of it start appearing in the first place?

Walk along most Puget Sound shorelines and you’ll encounter armoring. These seawalls, bulkheads, and revetments range from formal rock, concrete, metal, and wood walls that look to be carefully designed and engineered to haphazard piles of boulders, tires, and debris that appear to have been tossed up with little regard for an understanding of wave dynamics. Together they total about 700 miles of human-constructed barriers in greater Puget Sound, or enough to clad the entire Washington and Oregon coasts.

Long a part of the way people dealt with the Sound’s protean shores, armoring was historically justified by industrial and agricultural development for dikes and levees, railroads and roads, and reclamation and reuse. In a 2010 report, Washington Department of Ecology geologist Hugh Shipman wrote that by the 1950s though, large-scale residential communities that required dredging and filling of wetlands had supplanted previous reasons for armoring. More recently, an increase in people building homes along the Sound has led to consequent growth in private landowners constructing relatively small-scale bulkheads. Of the 57 percent of Puget Sound shoreline considered residential, roughly half has been armored.

Today, property owners are increasingly interested in environmental stewardship and there’s a lot more information on how to build sustainably on the shoreline.

Not only has the style of armoring changed, so has the ecological understanding of this massive alteration to the shoreline. Long viewed as relatively benign, shoreline armoring has become more of an “in your face” environmental issue, says Shipman. The obstructions narrow beaches by changing wave dynamics, reducing bluff erosion, and preventing the beach from migrating inland. The smaller, more constrained beaches result in habitat loss for clams and other shellfish, as well as insects, worms, and amphipods, which rely on the steady upper beach accumulation of drift logs and beach wrack (algae, seagrass, leaf litter, and other tide-deposited debris). Studies also show that armored beaches are less hospitable to the key forage fish surf smelt and Pacific sand lance, both of which spawn in beach sediment and require specific conditions harmed by armoring.

The news on armoring, however, is not all bad, says Shipman. In his more than three decades of work as a coastal geomorphologist for the state, he has seen a huge change in the social landscape. “When I began, most people were unaware of the potential problems with bulkheads, nor were they aware that the eroding shoreline is an important element of the coastal ecosystem. Today, property owners are increasingly interested in environmental stewardship and there’s a lot more information on how to build sustainably on the shoreline.”

People have long been altering the shoreline of Puget Sound and the Salish Sea, says Colin Grier, an anthropologist at Washington State University. The terraforming structures of Coast Salish people date back to 5,000 years before the present. They include clam gardens, or terraces created by building low rock walls, which trapped sediment and created additional habitat on shorelines. Grier points out that some were immense structures that could stretch along kilometers of shoreline. The oldest were built 3,500 years ago and are the earliest evidence for food-based land management in the region. Better known and more widespread are middens. Often thought of simply as shell refuse heaps, they can contain animal bones, artifacts, and other debris. At Shingle Point, on Valdes Island, south of Gabriola, middens date back more than 5,300 years ago, and like the clam gardens, created significant changes to coastal processes.

Grier has concluded that residents over the millennia specifically and consciously altered the shoreline for their own benefit, for domestic, ecological, and perhaps military reasons. “The changes were proactive, iterative, and adaptive and based on the collective oral history about the dynamics of the shoreline,” he says. “They are time-vetted solutions that we can learn from.”

With the arrival of European settler that dynamic began to change though Shipman says that the earliest shoreline changes were built more on a scale and in a manner directly related to the environmental conditions. He imagines a family living along the shoreline near a creek in the late 1800s and dumping rocks on the beach to “solve a problem,” such as protection from the highest tides. They then might place some piling to extend a wharf into the water to facilitate shipping their goods. “Next thing you know they’ve got armoring,” says Shipman. “It was primarily a utilitarian response.”

Modern armoring, however, has been more of a discretionary action. As the region’s population grew and became wealthier, property values have risen so that only wealthy people can typically afford to buy and build along the shoreline. What once had been a cabin that families visited seasonally to go clamming or swimming had grown into a mansion where people lived year-round. Now that people were permanent residents on very valuable property, they wanted to make sure their land and home were protected, and to use as much of their property as possible. In order to do so, they felt they had to armor, and they had the resources to do so.