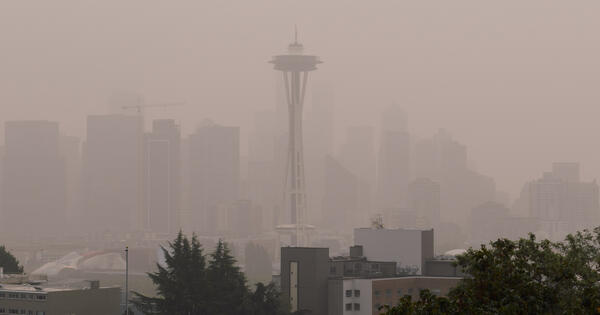 Seattle is already seeing the impacts of climate change, including record-breaking heat and smoke from West Coast wildfires; in the coming decades, parts of the city will be periodically inundated with floodwaters. Ann Grodnik-Nagle ’06, climate policy advisor for Seattle Public Utilities, says that Seattle is focusing on both mitigation—the city is committed to reach carbon neutrality by 2050—and adaptation, prioritizing vulnerable communities of color.

Seattle is preparing. It’s a process. There are some areas where we are very strong and others we’re still trying to figure out. We’re making a lot of investments in reducing our carbon footprint city-wide. We working to cut emissions from large buildings. We’re investing in electrical vehicles for the city and charging infrastructure.

The City of Seattle, King County, and the Port of Seattle have overlapping jurisdictions. Everyone has their own roles and priorities, but there’s a lot of really good coordination and alignment. Still, it’s challenging to come up with an orchestrated strategy for climate adaptation and preparedness.

Q: Which climate impacts is the city already experiencing, and which are you still preparing for?

The heat dome event in June was an example of a terrible climate impact that is going to become more frequent. The city is not equipped to manage 108-degree temperatures at all, let alone three straight days topping 100 degrees.

We’re starting to have a smoke season coming from wildfires burning throughout the West. We’re trying to figure out how we can address both extreme heat and poor air quality.

Sea level rise is a big one for us because it’ll be expensive. We’re looking at about two feet of rise by mid-century and five feet by the end of the century. Seattle is a city of bluffs, so it won’t mean portions of the city going underwater; it will be episodic inundation during king tides or storm surges. However, we have seven areas within city limits that are extremely vulnerable. They include low-income communities of color and industrial areas. We will need to invest in infrastructure as well as programs that will ensure community resilience.

Q: What’s the focus of your work?

I’m the climate policy advisor for Seattle Public Utilities. We provide drinking water, manage drainage and wastewater, and deliver solid waste services. I bucket our businesses based on how they fit into climate work—preparedness and adaptation or emissions reductions and mitigation.

For drinking water as well as drainage and wastewater we’re adapting to shifting water cycles—hotter drier summers when we need water and extreme precipitation in winters when we don’t need it. Our solid waste business has a mitigation focus. They’ve done a lot of work to seed circular economies within the city. We’re reusing some of our waste streams and putting those into new products that can be then sold, increasing local jobs and local revenues while reducing and diverting waste streams. It’s gaining a lot of traction including involvement from business.

Then an umbrella overarching both buckets is justice and how we prioritize communities and neighborhoods that have historically been underinvested in.