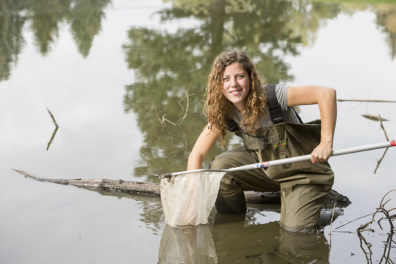 Even the anti-freeze frog is not invulnerable to stress, according to a new study led by Washington State University researchers.

The study, published in Proceedings of the Royal Society B on May 5, found that wood frogs, known for their ability to survive being frozen through, are more susceptible to lethal ranavirus infections if they have been raised in ponds high in salinity from road deicer. The findings lend more weight to the stress-induced susceptibility hypothesis, which could help explain dramatic wildlife population declines in recent years.

“We’re seeing these mass mortality events in wildlife that are often due to infectious diseases; while at the same time, we notice an association with some kind of environmental change,” said Emily Hall, the lead author on the study, which was part of her dissertation at Washington State University.

The researchers studied wood frog larvae in ponds in the northeastern U.S. where the use of salt as a road deicer is common. Originally, Hall was interested in the effect of road salt in ponds on the frog’s development, but at some of her study sites, all the tadpoles simply died.