International
Envisat image of the Mekong Delta in Vietnam 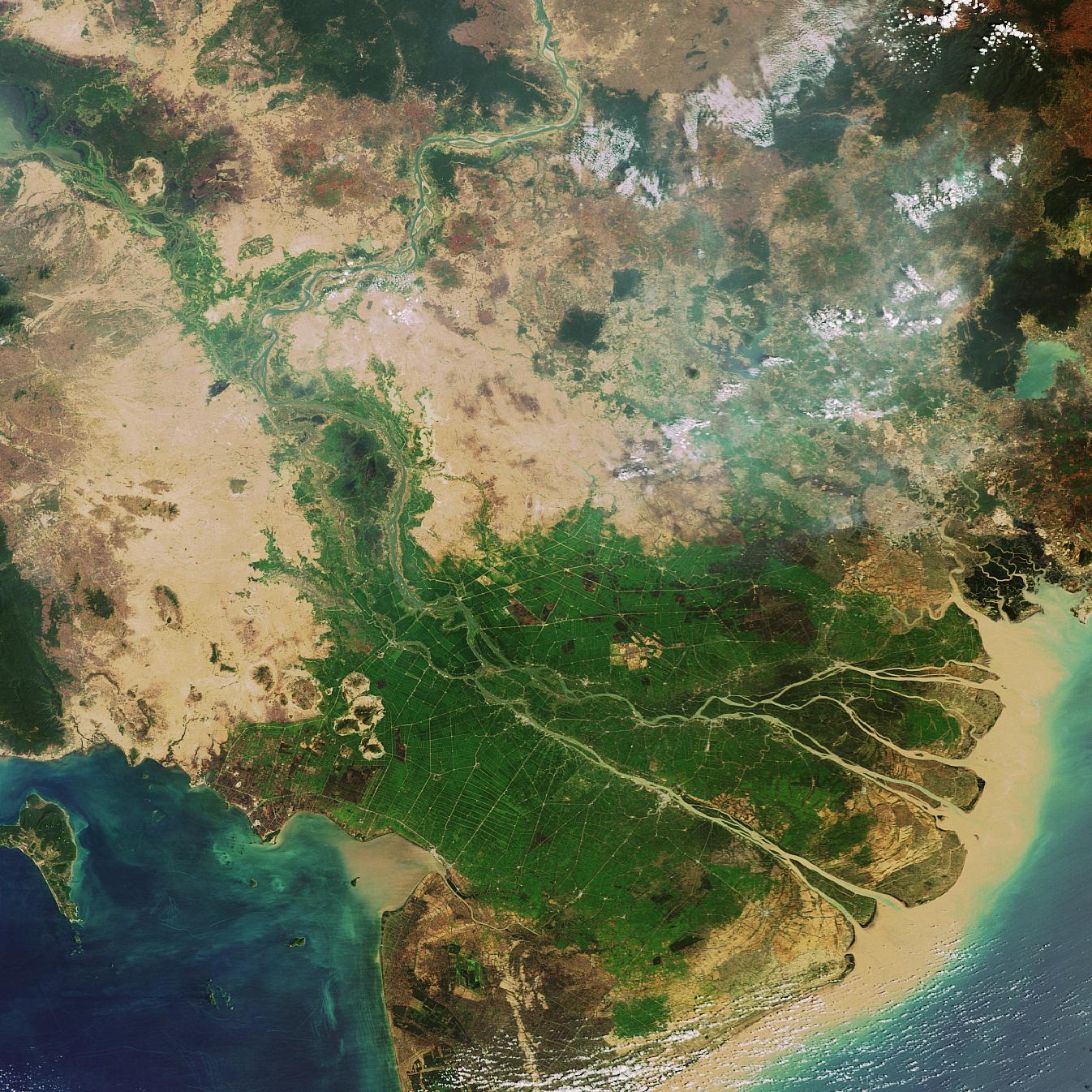 We combined projections of extraction-induced subsidence, natural compaction and global sea-level rise with new projections of fluvial sediment delivery to evaluate the potential effectiveness of sedimentation strategies in the Mekong delta to 2050. Our results reveal that with current rates of subsidence and sediment starvation, fluvial sediments alone can only preserve elevation locally, even under optimistic assumptions, and organic sedimentation could potentially assume a larger role. While sedimentation strategies alone have limited effectiveness in the present context, combined with enhanced organic matter retention and interventions reducing anthropogenic-accelerated subsidence, they can considerably delay future relative sea-level rise, buying the delta crucial time to adapt.

Relative sea-level rise (RSLR) increasingly affects the ability of societies around the world to function in coastal zones1,2. These at-risk communities must find solutions to the global problem of sea-level rise which are effective in local environmental and societal contexts3. While the global sea level is rising, other factors, e.g., land subsidence, also drive coastal elevation change and can locally have a much larger impact than global drivers4,5,6. Modern coastal river deltas share key physical characteristics which make them particularly susceptible to RSLR (Fig. 1): deltas are constructed of newly-deposited organic and inorganic sediment, which decomposes and compacts, thereby losing volume and reducing land elevation.

Modern deltas came into existance during a period of low rates of sea-level rise, no anthropogenically accelerated subsidence, and an uninterupted supply of sediment. Deltas around the world have started to lose land because of a reversal of these favourable conditions due to anthropogenic activities6,7, including the Mekong delta8,9, although some deltas have gained land due to activities like deforestation10. Under pre-Anthropocene conditions, elevation loss would be (over-) compensated for by sediment deposition from flooding. However, the balance in many deltas has shifted due to increased anthropogenic activities such as dam construction in upstream basins, land-use change, and mining of sand, water and fossil fuels within deltas causing sediment starvation and accelerated subsidence2,11,12.

The low-lying Mekong delta13, the third-largest delta in the world and predominantly located in Vietnam, has experienced severe anthropogenic disruptions in recent decades14,15,16. The delta is under pressure from a growing population, expanding cities, and intensifying agriculture and aquaculture activities17. As the upstream Mekong river basin is shared between five other countries (Cambodia, Thailand, Laos, Myanmar, China) with their own demands on the river’s resources, downstream Vietnam has little control over the fluvial fluxes reaching the delta18,19. The delta suffers from reduced sediment flows from upstream19,20, sediment extraction within the delta due to channel mining14,21, and dyke construction that impedes natural floods by restricting connectivity between rivers and floodplains22,23, as well as accelerated subsidence due to groundwater pumping24,25, on top of already high rates of natural compaction26 and other land-use induced subsidence processes, such as drainage or infrastructural loading27,28. The resultant loss of elevation drives RSLR25, coastline erosion9,14 and increased salinization16,29, posing a serious threat to the current population and future development15.

Recent studies have revealed the existential threat of anthropogenic accelerated subsidence to the future of the delta, with subsidence rates up to a magnitude larger than sea-level rise24,30,31, highlighting the urgent need for subsidence mitigation by reducing groundwater extraction25. Although in the case of the Mekong delta reducing groundwater extraction is potentially the most effective strategy to mitigate overall relative elevation loss25, controlled sedimentation is receiving much more attention, both in the scientific32 and public debate33,34. Increasing sedimentation through controlled flooding has been presented as a method to reduce environmental issues in the Mekong32and other deltas35. This strategy counters RSLR in deltas by encouraging sedimentation on delta land to maintain or build elevation relative to sea level35,36, allowing suspended sediment to settle out of floodwaters, mimicking processes occurring in preanthropogenic deltas. Managed sedimentation has occurred in several deltas, for instance in tidal river management in the Bengal delta37 and splay construction in the Mississippi38. Tidal river management involves breaking dykes in tidal locations to allow river water to flow into previously poldered land at high tide, bringing with it sediment, which is deposited inside the polder area39. After sufficient sedimentation, potentially over multiple years, the dykes are repaired and the polder land can continue to be used for agriculture or other purposes. In comparison, river diversions in the Mississippi use sluice gates to enable the passage of water through dykes into adjacent areas, water which carries sediment which then settles and raises elevation40. Sluice gates allow more control over the volumes of water and sediment diverted but incur more costs41. The effectiveness of all of these strategies is highly dependent on the exact hydrodynamics and management42,43.