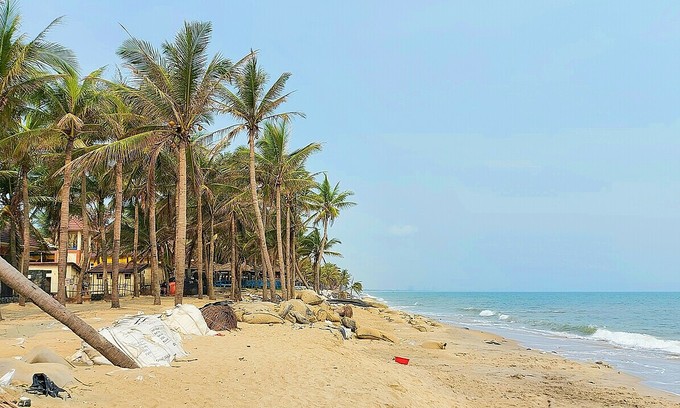 Tourism workers and businesses along Hoi An’s Cua Dai Beach have already suffered because of severe erosion. Covid-19 has made things even worse.

It’s 9 a.m. and Nguyen Thi Be, who has been selling coconuts for a decade on the 7.5-km-long beach five kilometers from downtown Hoi An, sits on a hammock and surfs on her smartphone.

The few tables in her shop are empty, though it's now peak tourist season.

"Nobody is coming here anyway. Only neighbors drop by to chat," the 53-year-old woman said.

"I used to be busy at this time, but now I am free all day and plays games on the phone to kill time."

Be said her business had already been shrinking because of serious coastal erosion preventing tourists from flocking to the beach. Somehow, she managed, because some high-spending European tourists loved sunbathing on the famous beach. During the peak season, which lasts from September to April, tourists to Cua Dai mainly come from Europe.

But since the Covid-19 outbreak broke out in Vietnam last year, the beach looks like a "ghost zone," Be said.

The government closed national borders and canceled all international flights in March 2020. Only Vietnamese repatriates, foreign experts and highly-skilled workers are allowed in with stringent conditions.

"Without foreign tourists, my business is worse than ever. I only open the shop from 6 a.m. until noon. Then I go home to rest," she said.

Nguyen Van Hung, owner of a seafood restaurant near Cua Dai Beach, has a similar tale of woe.

Son opened his restaurant in 2018, a year after the beach reopened for business. Authorities had shut the beach down for three years to deal with the severe impacts of coastal erosion.

With most visitors choosing An Bang Beach nearby, Son’s business suffered even more but he held on, thanks to European tourists. The pandemic, however, has dashed his recovery hopes. His restaurant now functions with just two employees.

"On some days streets leading to Cua Dai Beach has almost no passer-by and locals called it the 'ghost zone.’

"I have to close my restaurant as early as 5 p.m., because it is empty," he said, sighing. Hung doesn't know for how long he can maintain his business.

Be and Hung are among many tourism-reliant people – small business owners and workers – at Cua Dai Beach whose lives have been upended by the double whammy of erosion and pandemic.