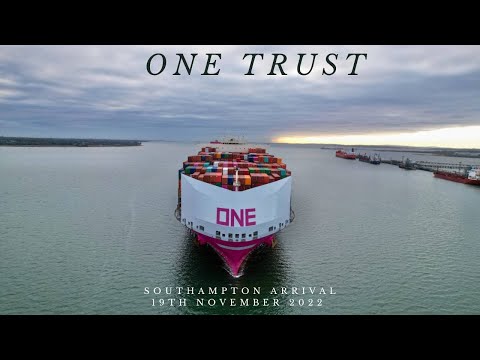 Video: The ONE Trust – World’s First Ship To Be Equipped With Wind Deflector

This weekend, a vessel of the Japanese company ONE (Ocean Network Express) made its first port of call equipped with a new device: a wind deflector on the bow. One Trust is the only of a series of six 20,170 TEU container ships to be equipped with this device.

The 20,170 TEU ONE Trust arrives in Southampton following the installation of a wind deflector on the bow. ONE Trust is currently the largest container ship to have this kind of device installed to date.

MOL one of the three founder members of Ocean Network Express (ONE) had previously experimented with this kind of structure on the smaller 6,724 TEU MOL Marvel in 2015. According to ONE bow devices can reduce fuel consumption by up to 4% in ideal conditions, with real-life gains likely closer to 2%.

The installation was carried out at the Qingdao Beihai Shipyard in China as part of the ships five-year class drydock.

ONE Tradition the fourth vessel of this class has just left the Beihai Shipyard in the shipyard where its windshield was also installed. The shipping line has a series of 24,000TEU ships being built at the Imabari Shipyard in Japan and early construction images show that these vessels will also have a windsheild installed as part of their design.