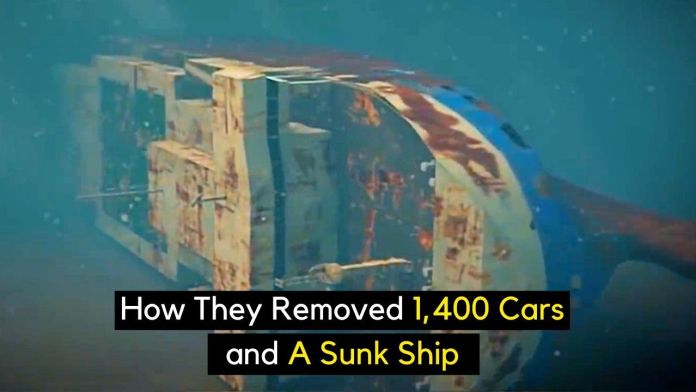 Video: How They Removed 1,400 Cars and A Sunk Ship From the Bottom of the Sea

Baltic Ace was a car carrier, a roll-on/roll-off ship designed to transport vehicles in a large, fully enclosed garage-like superstructure running the entire length and width of the vessel. She had eight cargo decks with a minimum free height of 2 metres (6.6 ft).

On 5 December 2012, Baltic Ace, a 148-metres (486 ft) long and 25-metres (82 ft) wide car carrier collided with the Cyprus-registered container ship Corvus J in the North Sea while underway from Zeebrugge, Belgium, to Kotka, Finland with a cargo of about 1,400 Mitsubishi cars likely headed to the Russian market. The incident took place some 40–50 kilometres (25–31 miles) off the Dutch coast south of Rotterdam on one of the busiest shipping lanes in the world at 18:15 GMT. According to a representative of the shipping company, the cause of the accident was likely a human error.

After the collision, Baltic Ace began taking on water, capsized and sank within 15 minutes in shallow waters. According to the ship’s manager, Corvus J likely hit Baltic Ace on the side, where void tanks forming a double side are only 1.3 metres (4.3 ft) wide, quickly flooding the cargo decks. Corvus J was severely damaged and her bulbous bow was bent, but she was not in danger of sinking and participated in the search for survivors.

The weather conditions, three-metre waves and snow, made the rescue operation difficult. As the search for survivors resumed on the following day, five members of the 24-person crew had been confirmed dead and six were still missing. Thirteen crew members, including the ship’s Polish captain, were winched to safety from liferafts by helicopters or picked up by nearby ships. According to Netherlands Coast Guard, the chance of finding more survivors was “virtually zero” and the search for the missing crew members, who might have been trapped inside the wreck, was called off on the day following the accident.