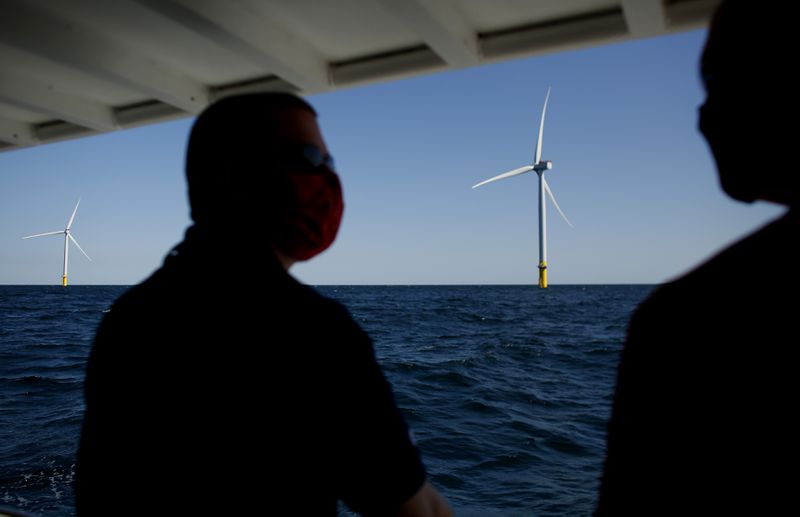 You can’t see them from the Oceanfront, but at more than 600 feet tall, they would eclipse the state’s tallest building, the 508-feet Westin Virginia Beach Town Center. Together, those two turbines, churning along with three 253-foot blades apiece, represent a key step toward Virginia’s carbon-neutral future.

And the groundbreaking pair — at about 27 miles off the coast, they’re the first turbines in federal waters — is just the tip of the iceberg.

In 2026, Dominion officials say, the pair of research turbines will have grown by another 220, with an underwater cable transporting enough energy to land to power some 660,000 homes. Dominion says it will become the nation’s largest offshore wind farm.

On a Thursday morning trip out to see the turbines — which will begin regularly feeding electricity into Dominion’s system this November — it’s clear the ambitious $8 billion project has gained some serious momentum.

Onboard the Atlantic Explorer were a few dozen key stakeholders, including officials from Dominion and Old Dominion University, as well as local leaders such as Doug Smith, the CEO of the Hampton Roads Economic Development Alliance.

That boat is typically used for 90-minute sightseeing tours, where the main attraction are bottlenose dolphins. The main sight for Thursday’s trip, though, was harder to miss.

Starting from the Virginia Aquarium, the two turbines were visible about 45 minutes into the boat trip, first appearing as small toothpicks on the horizon.