Mid-Atlantic
Construction of the Fog Point Living Shoreline Breakwater in the Chesapeake Bay. Living shorelines, an element of green infrastructure, control erosion and can help act as a buffer against flooding. Matt Whitbeck / U.S. Fish and Wildlife Service / Virginia Mercury 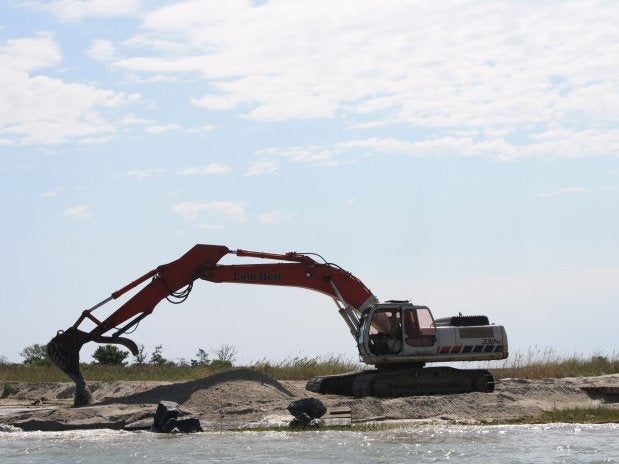 Rising sea levels accelerate the Atlantic and Gulf coasts, according to the National Oceanic and Atmospheric Administration.

With sea level rise continuing to accelerate along the Atlantic and Gulf coasts, Virginia coastal communities in 2019 saw two to five times more nuisance flooding than the national average, a federal report released this week shows.

"Evidence of a rapid increase in sea level rise-related flooding started to emerge about two decades ago, and it is now very clear," the report from the National Oceanic and Atmospheric Administration says. "This type of coastal flooding will continue to grow in extent, frequency and depth as sea levels continue to rise over the coming years and decades."

But while the national frequency of nuisance flooding — a measure that combines frequency measurements from all U.S. coastal tidal gauges — was four days in 2019, such flooding occurred in Virginia last year anywhere from nine days in Kiptopeke on the Eastern Shore to 20 days at Lewisetta on the Northern Neck.

In between, Wachapreague on the Eastern Shore saw 13 days of nuisance flooding, Sewells Point in Norfolk experienced 14 days and Windmill Point in Hampton saw 17 days.