Mid-Atlantic
Plenty to see an do along the boardwalk in August 1970. William Abourjilie / The Virginian-Pilot 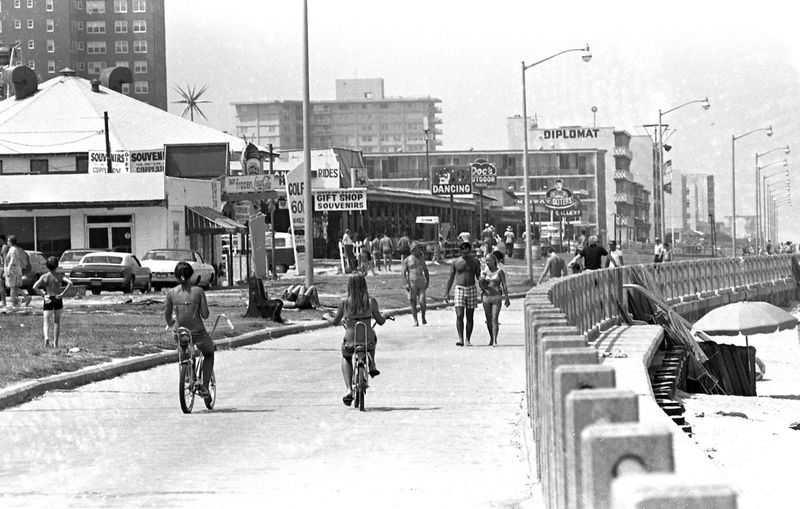 When the coronavirus shut down city parks and recreation centers last spring, Hampton Roads residents and some tourists headed to one of the few public spaces open for exercise: the Virginia Beach Boardwalk.

The 3-mile long, 28-foot wide path is the resort area’s enduring link, stretching from 1st to 40th streets at the Oceanfront.

For more than 100 years, some form of the beachfront promenade has existed — offering unfettered views of the ocean.

In the 1880s, Norfolk businessmen and railroad investors built a grand hotel with what is considered the city first boardwalk. They recognized that the small seaside community could become a tourist destination.

Back then, it was actually a boardwalk made out of wooden planks — an amenity of what originally was The Virginia Beach Hotel before it was renamed the Princess Anne Hotel in 1887. The boardwalk stretched two city blocks between 14th and 16th streets.

The boardwalk was later expanded so it went from 12th to 16th streets. A turn of the century photograph shows the promenade with the earliest version of electric lighting.

Wealthy vacationers traveled to the beach by rail and strolled down the path enjoying the seabreeze. Women wore long flowing dresses and hats and carried parasols. Men donned jackets and ties.

One year later, the Princess Anne Hotel burned in a tragic fire that killed two employees. All 80 guests escaped.

A bucket brigade formed between the hotel and the ocean to protect the adjacent cottages. Men and women tore up the wooden boardwalk planks to prevent the flames from spreading, according to a Virginian-Pilot newspaper report.

After the fire, the walkway and dancing pavilions were expanded south, toward a smaller inn, The Arlington.

A few years later, the railroad investors built the Virginia Beach Casino, which was later developed into Seaside Park, between 30th and 33rd streets. It featured dance halls, a saltwater swimming pool and restaurants with indoor and outdoor dining. That hotel also had a beachfront walkway, made of brick and shored up with a concrete block wall.

“It was definitely an innovation for the period,” said William Hazel, executive director of the Virginia Beach Surf & Rescue Museum at 24th Street, where historical photographs showing the early incarnations of the Boardwalk can be viewed on the second floor.