Mid-Atlantic
Dominion Energy plans to develop the nation's largest wind farm — an $8 billion, 220-turbine project — off the coast of Virginia Beach by 2026. via Dominion Energy 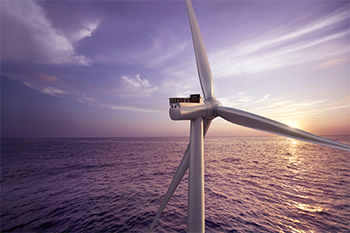 The offshore wind industry could create up to 5,200 jobs in Virginia (with a majority in Hampton Roads) and an estimated $740 million in total economic activity during the next several years, according to an economic impact analysis conducted by Henrico County-based Mangum Economics and released Tuesday by the Hampton Roads Alliance.

Richmond-based Dominion Energy Inc. recently completed installation of the first two turbines in federal waters as part of its Coastal Virginia Offshore Wind (CVOW) project. The next phase of the approximately $8 billion project is a large-scale, 2.6-gigawatt commercial operation, which will be enough to power approximately 660,000 homes.

During the next six years, construction on Dominion’s proposed offshore wind farm expansion will create an estimated 900 jobs. And after manufacturing and construction are completed, it’s estimated that the continued operation of the project will create 1,100 direct and indirect jobs across the state. Jobs sectors would include engineering, wind technology, marine maintenance, logistics, construction, real estate, home improvement, hospitality and health care. The project is projected to generate more than $209 million in economic activity and nearly $6 million in local tax revenue for Hampton Roads.