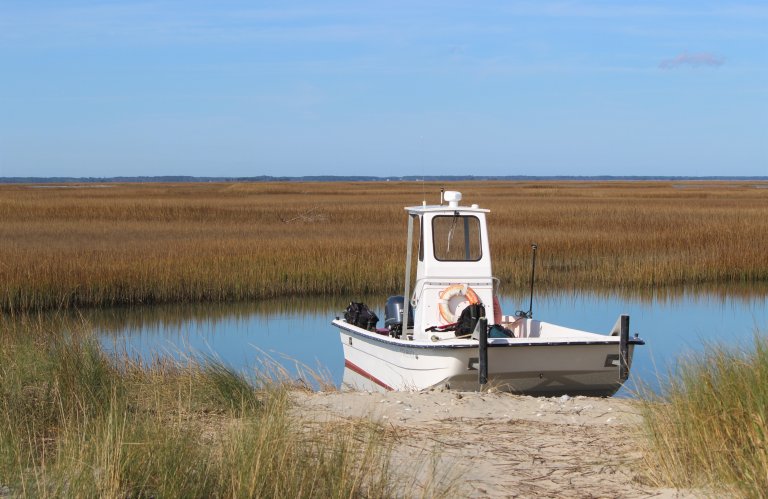 VA - On Virginia's Far Atlantic Flank, a Cherished Store of Salt Marshes Is Being Lost

On a still day, floating in a flat-bottomed boat in the waters that stretch like sheets of glass between the mainland and the barrier islands off Virginia’s Eastern Shore, it’s hard to believe anything in this corner of the world has ever changed at all.

For centuries upon centuries, you could believe, this region has been nothing more than vast horizontal expanses of water, grasses and sky, held together by thin strips of land. Here is home to an endless cycle of tides, schooling fish, great migratory sweeps of birds pausing to rest as they come and go on their long journeys between the Arctic and South America.

But that sense of a world set off from time is an illusion. One of the greatest ironies of Virginia’s Eastern Shore is that its aura of timelessness is made possible only by ceaseless change. It’s the constant shifting of the barrier islands and the salt marshes behind them that have shielded the area from lasting human encroachment. Now, though, the marshes have run up against a human intrusion much harder to escape: climate change. As increasing global air and ocean temperatures accelerate the movement of the barrier islands landward, the Eastern Shore’s salt marshes are disappearing faster than they can rebuild themselves, leaving the mainland more vulnerable to rising waters and increasingly violent storms.

“These land masses have been responding to these forces for thousands and thousands of years,” said Alex Wilke, a coastal scientist with the Nature Conservancy’s Volgenau Virginia Coast Reserve where many of the salt marshes lie. But, she cautioned, “the pattern that we’ve seen in the past isn’t necessarily the pattern we’re going to see in the future.”