Mid-Atlantic
Tangier Island, Virginia crab shanties where fishermen make a living selling from the Chesapeake Bay. The crab shanties, where fishermen gather soft-shell crabs, are built on pilings in Tangier’s only harbor. The island, one of the most isolated communities in America, is disappearing as a result of climate change. Estimates are that the island will be uninhabitable 50 years from now. (Getty Images / EyeJoy) 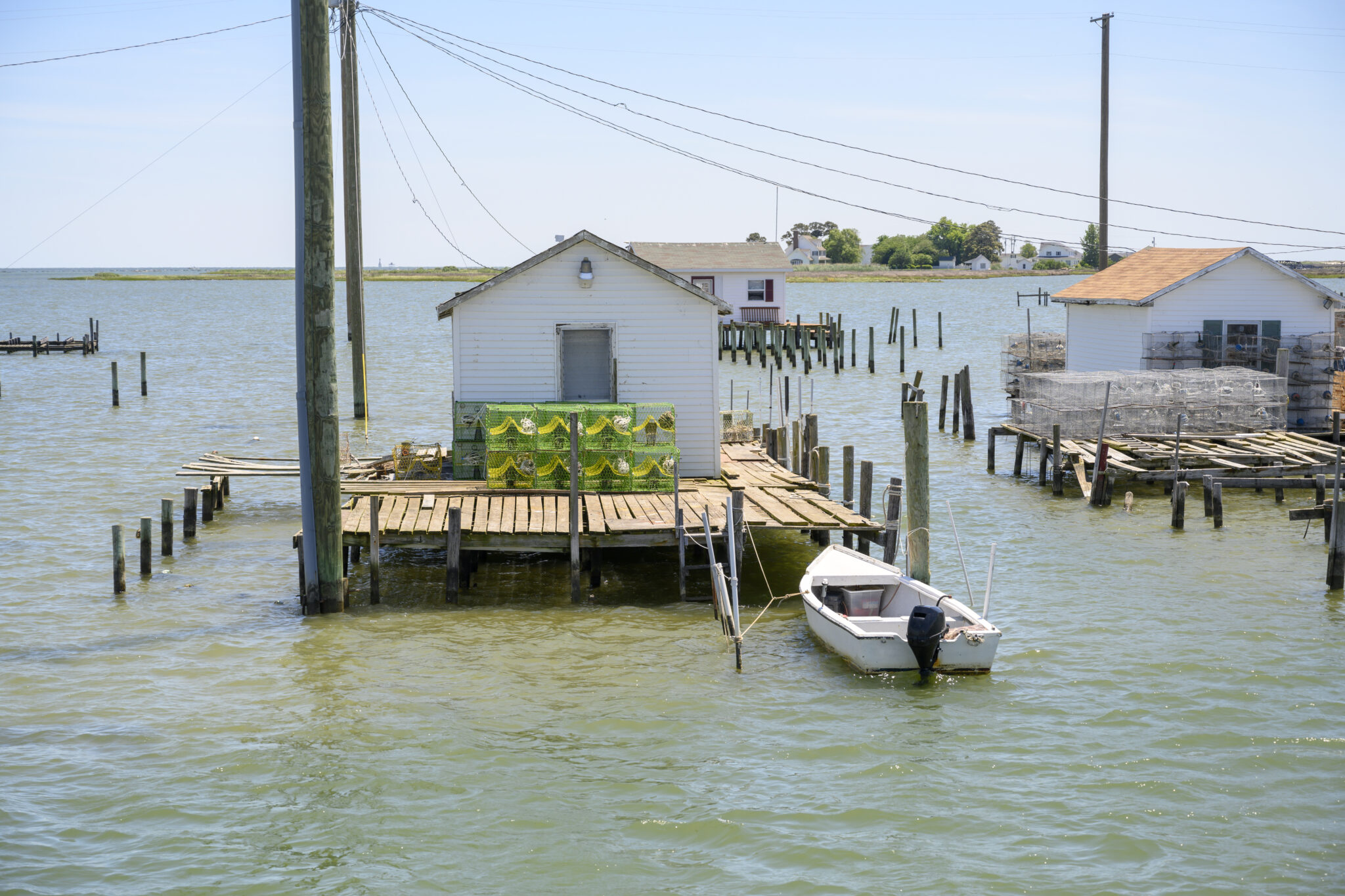 “Tangier is a cultural and historic gem that is treasured by people from all over America, as well as a crucial piece of the Chesapeake Bay’s fishing and crabbing economy. I’m fighting for this funding because Virginians and all Americans stand to lose a great deal if this island becomes uninhabitable.” U.S. Sen. Tim Kaine

A so-called “doomsday glacier” in Antarctica that could raise sea levels several feet is disintegrating faster than previously predicted, according to a new study.

And an analysis by Climate Central, an independent science and communications group, found that because of sea level rise, local governments will face steep cuts in revenues as taxable land is subject to flooding, my colleague Sarah Vogelsong reported this week.

Against this dire backdrop, Virginia’s two senators, Tim Kaine and Mark Warner, recently secured $25 million in a budget proposal for imperiled Tangier Island, the place once explored by John Smith and colonized by the English centuries ago.

The money would fund a pilot project to repurpose dredging material on Tangier, The Washington Post reported. The funding still has several legislative steps to clear before becoming law. Tangier residents can’t afford to pay for such projects themselves.

The disconnect between dire climate reality and rose-colored optimism is stark.

Nor does the dredging proposal take into account similarly jeopardized communities around the United States. They will beg for their own federal lifeline. Most are bigger and have thousands more people than the 1.2-square-mile island in the Chesapeake Bay with a population of about 450 people.

Yet I wasn’t surprised by the sanguine statements Kaine and Warner, both Democrats, issued about bolstering Tangier. They’re representing their constituents, after all.

The island “boasts a thriving tourism industry, a rich history, and a delicate natural ecosystem that boasts the Chesapeake Bay’s signature blue crabs,” Warner, through a spokesperson, said Tuesday. “Most importantly, Tangier is home to hundreds of Virginians – many of them watermen who have driven Virginia’s seafood industry for many generations. The truth is, we can’t afford to give up on such a quintessential part of Virginia.”

Kaine noted through a spokesperson: “Tangier is a cultural and historic gem that is treasured by people from all over America, as well as a crucial piece of the Chesapeake Bay’s fishing and crabbing economy. I’m fighting for this funding because Virginians and all Americans stand to lose a great deal if this island becomes uninhabitable.”

He and Rep. Elaine Luria, a fellow Democrat, recently toured the island with local officials.

The initiative by the two senators is well-meaning, but dubious. Enormous sums of taxpayer dollars would be needed to fight against nature. It could be a fruitless task.

The proposed funding is a fraction of an estimated $250 million to $350 million needed to fully restore and protect Tangier Island, David Schulte, a marine biologist with the Army Corps of Engineers in Norfolk, told me this week. He’s been visiting the island since 2002, and he co-wrote research with his son last year about the island’s current situation and long-term outlook.