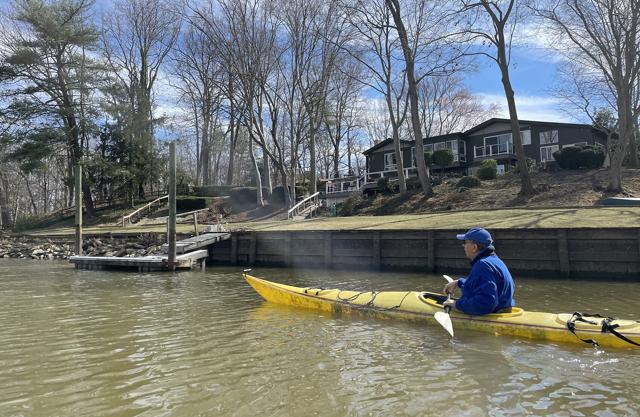 Some property owners along Virginia’s tidal waterways are concerned that a recent change in state law has muddied the waters for managing their shorelines.

Some property owners along Virginia’s tidal waterways are concerned that a recent change in state law has muddied the waters for managing their shorelines.

Natural or living shorelines have for years been the preferred approach of scientists and state agencies to prevent erosion, accommodate sea level rise and preserve tidal wetlands along shorelines in the Chesapeake Bay region. Rather than hardening property edges with concrete or stone riprap, living shorelines create natural contours that receive the water’s ebb and flow and, over time, can be more resilient. They also create habitat for wildlife and filter polluted runoff from the land.

So, in 2020, Virginia turned its push for softer shorelines into law. Legislators directed the Virginia Marine Resources Commission to approve only living shoreline designs when property owners seek permits for shore stabilization projects, “unless the best available science shows that such approaches are not suitable.”

The new law does not necessarily mean that existing hardened shorelines — with concrete walls, bulkhead or stone riprap — will need to be immediately demolished and replaced with beds of seagrass. About 18% of Bay shoreline has already been armored, with much of that hardening concentrated in urban areas.

But property owners who have a seawall nearing the end of its life or in need of repair are worried the law could require costly changes, and they point to a few properties in the state that have already had trouble getting permits. Words like “suitable” — intended to give the scientific community and regulators flexibility — are viewed as inherently vague by property owners who aren’t sure what will be expected of them when they seek a new permit.

“Right now, there’s fear about how it would be applied,” said Katherine Ward, co-chair of the Mount Vernon Council of Citizens’ Association and former president of an association of nearly 500 homes, 64 of them on the Potomac River. Regulators, she said, “may seem to think there’s flexibility in the law. But my neighbors who live on the water don’t believe there’s flexibility.”

Shoreline homeowners in Fairfax County, VA, especially concerned about the law’s impact on personal property rights, worked with Del. Paul Krizek (D-Fairfax) to propose a bill with significant changes. It died in committee early this year. The measure would have softened living shoreline requirements for properties with existing erosion measures or where a living shoreline would “substantially detract … from enjoyment of the property.”

Maryland has had a living shorelines law similar to Virginia’s since 2008. But Maryland explicitly mentions existing structures in its permit process and allows for “certain exceptions” through a waiver application.

About a year after moving into his home in Alexandria, VA, in 2019, Brian Jones began a process that would make him the first in Fairfax County to seek a permit under Virginia’s new living shorelines law. Other homeowners saw his project as an early test of whether existing infrastructure could be maintained under the new law but say it’s still not clear.

Jones hired a contractor to assess the condition of a wooden seawall that forms the edge of his lawn which, at low tide, stands several feet above the creek. The contractor said it was beyond repair — nibbled by beavers, with sediment leaking from gaps — and needed to be replaced. He proposed building a new wall on the water side before removing the existing one and filling in the gap.