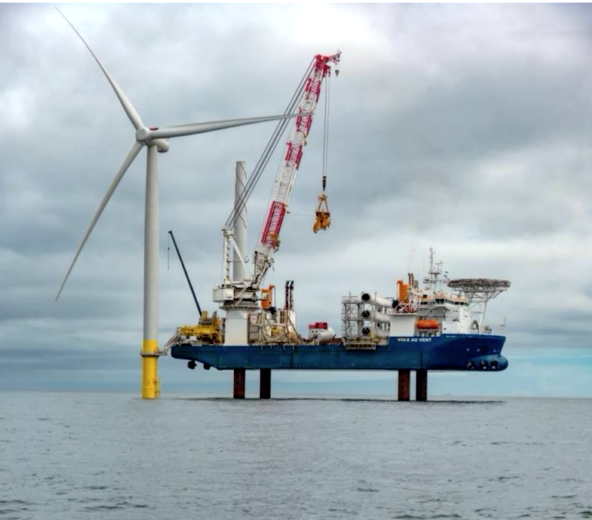 Dominion Energy and offshore wind developer Ørsted have installed the first two wind turbines on a federal lease, a milestone in what backers hope is a first step toward arrays off Virginia producing up to 2.6 gigawatts of power.

The Vole au Vent, sailing under the Luxembourg flag, carried components for the two 6-megawatt generators from Halifax, Nova Scotia, to the work site 27 miles east of Virginia Beach. It’s one in a fleet of about 25 major vessels and more than 400 crew engaged in the project, expected to be generating power for the Virginia grid by late summer or early fall, said Hollet.

Dominion plans the pilot program as a precursor to three phases for a utility-scale wind project on its federal lease, using much larger 14 MW Gamesa wind turbines, to be online in 2026.

The fate of plans for 16 wind energy leases off the East Coast hinges on findings from the Bureau of Ocean Energy Management in its ongoing environmental analysis of the Vineyard Wind project in southern New England waters.

That review — ordered by the Interior Department after NMFS officials raised objections that an early draft environmental impact statement failed to account fully for fisheries and environmental impacts — will become a new framework for analyzing future projects as well, according to BOEM officials.

But the Virginia project is a significant step as the first turbine installations in federal waters. Hollet said BOEM experts worked alongside crews on the project to observe construction — including the use of a “double bubble curtain,” a technique using compressed air to surround foundation installations and mitigate the impact of underwater noise on marine life.

How the Virginia turbines handle environmental and weather conditions will be another test. The site off the Virginia capes historically has seen Category 2 hurricanes, and the developers’ analyses indicate they would be able to survive Category 5 conditions for a brief period, said Mark Mitchell, Dominion’s director of generator construction.

Read also Wind farm off the coast of Big Sur? It’s not as crazy as it sounds.  Monterey County Weekly