Mid-Atlantic
The GustoMSC NG-16000X-SJ offshore wind turbine installation jack-up vessel design for Dominion Energy will be constructed by Keppel AmFELS. It is the first Jones Act-compliant vessel of its kind. GustoMSC rendering 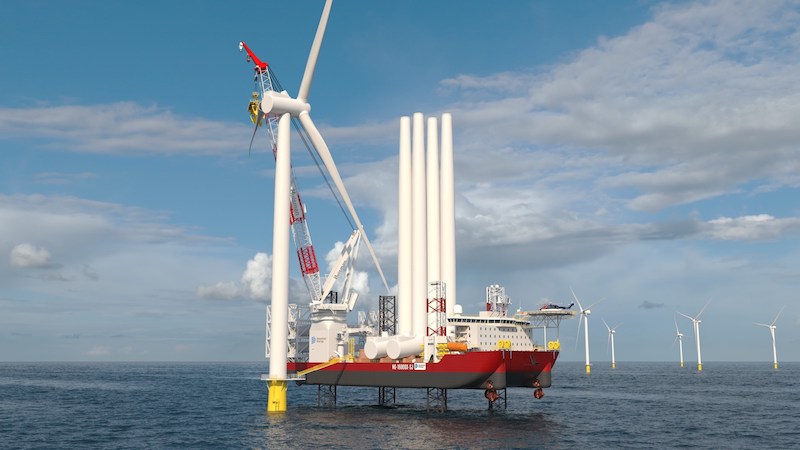 The Port of Virginia is leasing 72 acres at its Portsmouth marine terminal for Dominion Energy to use as base for building out its 2.6-gigawatt Coastal Virginia Offshore Wind project, a precursor to making the state a center for the U.S. wind industry, said Gov. Ralph Northam.

The agreement “to propel development of the largest wind energy project off the United States” will “dramatically accelerate” further developments and “positions Virginia as the hub of the emerging offshore wind industry,” Northam said in announcing the lease at the International Partnering Forum Wednesday morning in Richmond, Va.

Northam said the long-term buildout of Dominion’s future turbines are key to his administration’s goal of 52 GW of offshore wind power by 2050.

“It will be the largest on this side of the Atlantic Ocean,” said Robert Blue, president and CEO of Dominion Energy, with 1,000 construction jobs and up to 1,100 operating and maintenance and related positions.

“We’re pursuing strategies to get as clean as we can, as fast as we can,” without sacrificing reliability, he said.