Mid-Atlantic
Thousands of seabirds at Fort Wool in Hampton on Tuesday, July 7, 2020. The unprecedented $2.2 million project moved the birds off the Hampton Roads Bridge-Tunnel island to make room for a new tunnel. Kristen Zeis / The Virginian-Pilot 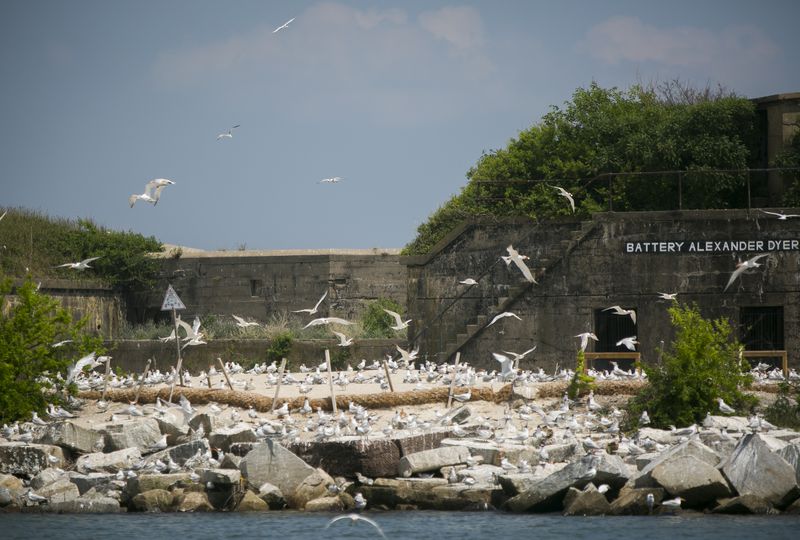 VA - Against All Odds, the Hampton Roads Bridge-Tunnel Bird Colony is Saved

At the mouth of the Hampton Roads harbor, a success story unfolds. It’s told through legions of beating wings, swirling around an old fortress like specks in a snow globe.

Just months ago, this 25,000-bird colony — one of the most important gatherings of endangered migratory seabirds in Virginia — seemed doomed.

Every spring for decades, terns, skimmers and gulls have headed for the Hampton Roads Bridge-Tunnel. On the gravely ground of the facility’s southern island, they hatched their next generation, isolated from mainland predators, surrounded by waters rich with food.

But last winter, while the birds were away in warmer climates, the colony’s nesting site became a construction zone for the $3.8 billion tunnel expansion. Pavement was poured across the entire island to accommodate equipment, leaving the birds destined for trouble this spring. Upon arrival, they’d be forced to scatter to the winds, where their chances of raising young would dwindle.

Alarms sounded in birding and environmental communities. Pressure mounted in Richmond. In mid-February, the governor announced a plan to transplant the displaced colony to an adjacent island: Fort Wool, a centuries-old sea fort that hangs off the southern island like a kidney.

Sounds simple enough. Both islands are manmade, off-limits to the public, similar in size — 10-15 acres — and even connected by an earthen causeway.