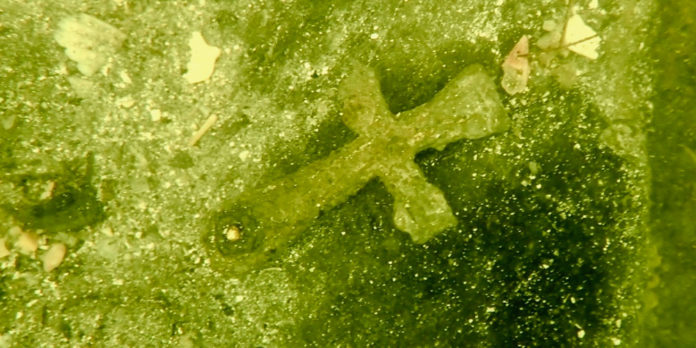 In mid-July, a team of divers from several organizations took to the murky waters of Coral Bay harbor to confirm what several local divers have quietly alleged for a long time: the existence of a partially buried ship dating back to the early 1700s that could prove to have great historical significance.

Jay Haigler, a board member and lead instructor for Diving with a Purpose, was part of a 10-member team that included members of his organization, the National Association of Black Scuba Divers, the Society of Black Archaeologists and Search Inc.

The purpose of the expedition was to assist in defining the age of the wreck, assessing its size, and documenting the part of the ship that is currently exposed. Nearly 30 feet of the ship is above the muddy bottom, “But we believe there is more covered with sand and silt,” Haigler said. “Further testing and evaluation is warranted.”

Experienced in maritime archaeology, Haigler is cautious about drawing conclusions about what the team discovered in its nine days of diving in Coral Bay. Researchers are still processing the data collected from this preliminary expedition, he said, “and there’s a lot more data we need to collect before we can make an interpretation.”

However, given the date of the wreck, Haigler was willing to speculate that “It might be possible, and I have to stress the word ‘might,’ that this ship was associated with the Slave Insurrection of 1733. That would be historically significant.”

Haigler said he was contacted in April by David M. Brewer, the senior archaeologist with the State Historic Preservation Office, a division of the V.I. Department of Planning and Natural Resources, who was seeking to know more about the wreck and its location.