Caribbean
Boats anchor close to shore while thrill-craft speed about in Round Bay. (Photo submitted by Friends of Round Bay) 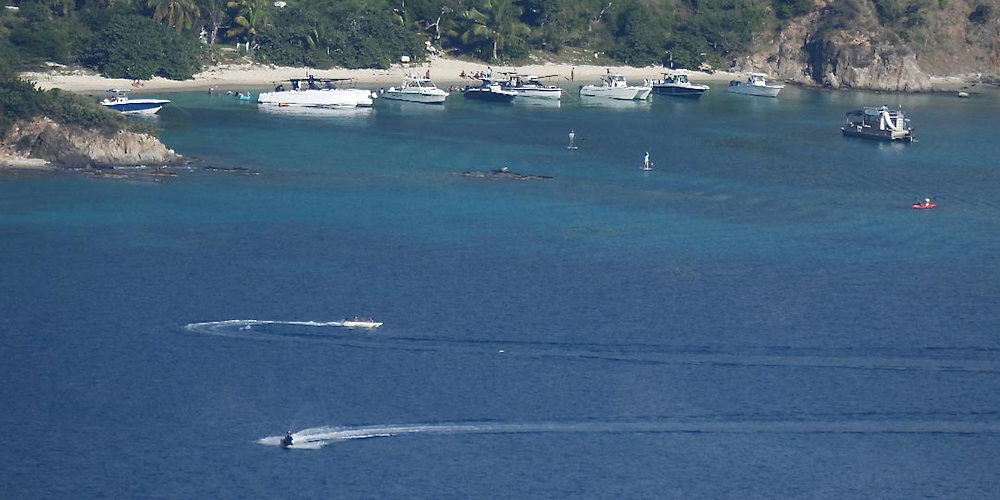 This is the second in a series of articles exploring the recent resurgence of the recreational boating industry. This part of the series looks at restricted areas.

In the early 1990s, the administration of Gov. Alexander Farrelly began a concerted effort to preserve marine resources, including coral reefs and seagrass beds, from overdevelopment. Their efforts resulted in legislation that established restricted areas.

A recent surge in the recreational boating industry has led to calls for greater enforcement of existing laws and in some cases further restrictions for popular marine sites.

In July, Ronald and Kathleen Vargo, homeowners on Round Bay, filed a notice of intent to file suit against the Department of Planning and Natural Resources for failing to enforce mooring, anchoring and boating law mandates; Antiquities and Cultural Properties laws; and the Endangered Species Act. A notice of intent must be filed at least 60 days before the lawsuit against the government can be enacted.

The 60-day waiting period has passed, but neither the Vargos nor DPNR has provided further comments as of Sunday.

On a Friday in late July, an unnamed contractor installed a series of buoys excluding boats from the shoreline of Round Bay at the scenic East End of St. John.

Some members of Friends of Round Bay, a community action group, were completely caught off guard: Without any notice and after months of cries for enforcement, the government was finally taking action to protect a bay containing acres of precious coral reefs and seagrass beds from a sharp rise in recreational boating use.

The unannounced installation of the “no-boats” buoys sent waves of alarm through the Coral Bay charter boat community. Where would they take their guests to snorkel and dive if they couldn’t get access to the nearby sites within Round Bay?

Neither faction had much time to wallow in their emotions. The next day, the buoys were removed.

Marlon Hibbert, director of Coastal Zone Management, a division of the Department of Planning and Natural Resources, explained the buoys’ mysterious installation and removal.