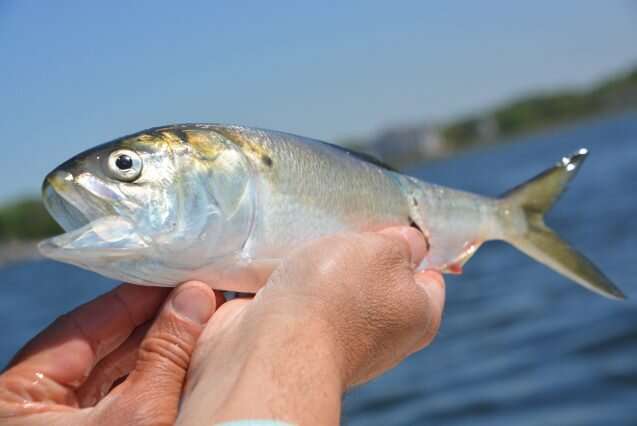 Menhaden (commonly known as bunker or pogy) are considered one of the most important fish in the sea. They are a type of forage fish, or filter feeders, mitigating harmful algal blooms while also being a vital food source for whales, striped bass, redfish, eagles, osprey and many other animals.

Omega Protein Corp and Omega Protein, Inc. may not be household names, but many of their products are. These two companies, collectively known as "Omega," compose one of the largest reduction fishing organizations in North America. They capture and process fish known as menhaden, then resell the "reduced fish" for use in pet food, agriculture and aquaculture feed, and human fish oil supplements. By mass harvesting menhaden, Omega is putting the marine ecosystems in the Atlantic Ocean and the Gulf of Mexico at risk, while also violating the Clean Water Act and other federal laws.

Menhaden (commonly known as bunker or pogy) are considered one of the most important fish in the sea. They are a type of forage fish, or filter feeders, mitigating harmful algal blooms while also being a vital food source for whales, striped bass, redfish, eagles, osprey and many other animals.

According to the Chesapeake Bay Foundation, in 2005, the population of this vital species reached a record low since the 1940s, and has remained low for the last 20 years. Yet companies like Omega catch and process about 6 billion menhaden per year. Without immediate change, Omega's actions have the potential to damage the food web and continue to drive down populations of striped bass and other predator species that rely on menhaden for food. A study in 2017 found that reduction fishing caused a nearly 30% decline in the population of Atlantic striped bass, the most popular marine game fish species in the country.

Stricter fishing regulations and monitoring, especially in the Chesapeake Bay, are essential. In the meantime, consumers can help save menhaden by avoiding Omega products and switching to menhaden alternatives, thus decreasing the market demand.

Throughout Omega's company history there have been many accounts of regulatory breaches, ranging from surpassing the fishing limit and violating the Clean Water Act to falsifying information to qualify for federal loans.

Omega received government funding under the condition that they would be in compliance with federal environmental regulations. However, in 2013 the Environmental Protection Agency (EPA) prosecuted Omega for two wastewater violations in Virginia. The first offense occurred between May 2008 and September 2010, when the company illegally dumped fish waste, or bail water, from its processing facility into Virginia's coastal waters. To make matters worse, the bail water contained additional pollutants and chemicals. Between April 2009 and September 2010, Omega proceeded to violate the Clean Water Act once again; its fishing fleet was caught discharging wastewater directly into the sea. The wastewater was oily and contaminated with waste from the ship. Omega pleaded guilty to these violations, resulting in a three-year probation period, a $5.5 million fine, and $2 million payment to the National Fish and Wildlife Foundation specifically allocated to restoration projects in the Chesapeake Bay.

Despite the opportunity to implement ethical and responsible procurement practices, Omega did the opposite. In 2017 it became apparent that Omega had not only violated the terms of the previous plea agreement, but also discharged pollutants in the Gulf at its Louisiana site. Yet again, Omega pleaded guilty to dumping wastewater in 2014 and 2016. The resulting plea deal consisted of another three-year probation period, a $1 million fine and $200,000 corporate community service. It is discouraging that the second punishment was less aggressive, with the fine decreasing from $5.5 million to $1 million.

In addition to the various Clean Water Act offenses, Omega falsified information in both annual and quarterly reports, violating the antifraud provision in the U.S. Securities Act and the reporting provision of the Exchange Act and Rules.

To apply and gain approval for federal loans, Omega signed a contract stating that the company was in compliance with federal environmental regulations, that they had not received any notices regarding prior violations, that there were no pending investigations or suits against them, and that they would notify the National Marine Fisheries Service of any events that may impact the conditions of the agreement. By December 2014, Omega had qualified for $21.1 million in government borrowings from five different loans. A number of the reports that they filed in order to receive these loans were falsified. They were also required to develop and maintain an environmental checklist, but did not implement either.