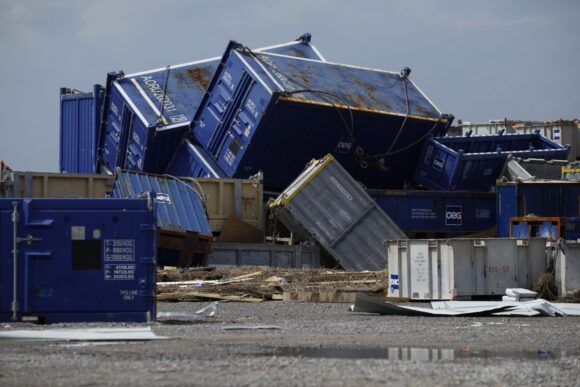 If anyone should be attuned to the real-world impacts of global warming, it’s the policy makers and business heads that have to deal with the fallout. But even the most well-intentioned can fail to grasp just how bad things could get if climate goals aren’t met.

At least that’s the impression I get. That’s why I reached out to Andy Pitman and Sonia Seneviratne, two of the world’s top experts on the most catastrophic effects of climate change. Their fields of study focus on extremes and compound events. Both worry that institutions are too focused on outcomes we can predict with high confidence. There isn’t enough appreciation of the risks associated with new weather patterns we don’t yet understand.

Warming of about 1.2 degrees Celsius from pre-industrial levels has already had devastating consequences. “Once we get around 2°C we are getting to a climate regime which hasn’t been seen for as long as the human species has been at work,” said Seneviratne, a professor at ETH Zurich who oversaw the chapter on extremes in the most recent Intergovernmental Panel on Climate Change report. The document, published every six to seven years, is the pinnacle of scientific knowledge about global warming.

Decision makers don’t fully comprehend the second-order effects, after physical destruction, that increasingly extreme weather events will have on our social and economic systems. Some of these outcomes are hard to predict and that uncertainty will only grow the more fossil fuels we burn.

That’s one of the reasons why economic policy makers focus their analysis around what is best known, such as mean temperature changes and historical correlations between gross domestic product and climate.

A seminal paper published by the Bank for International Settlements warned that the “Knightian uncertainty” and “epistemic break” created by climate change present a deep challenge to monetary policy. But in practice the unknowns are still being overlooked. New scenarios produced for the central banks’ climate network in June, for example, only consider the effects of increases in temperature, excluding other factors such as extreme weather and sea-level rise.

Pitman, director of a multi-university center on climate extremes in Australia who has also contributed to previous IPCC reports, points to financial stress tests and macroeconomic modeling as one example of where this kind of thinking goes wrong.