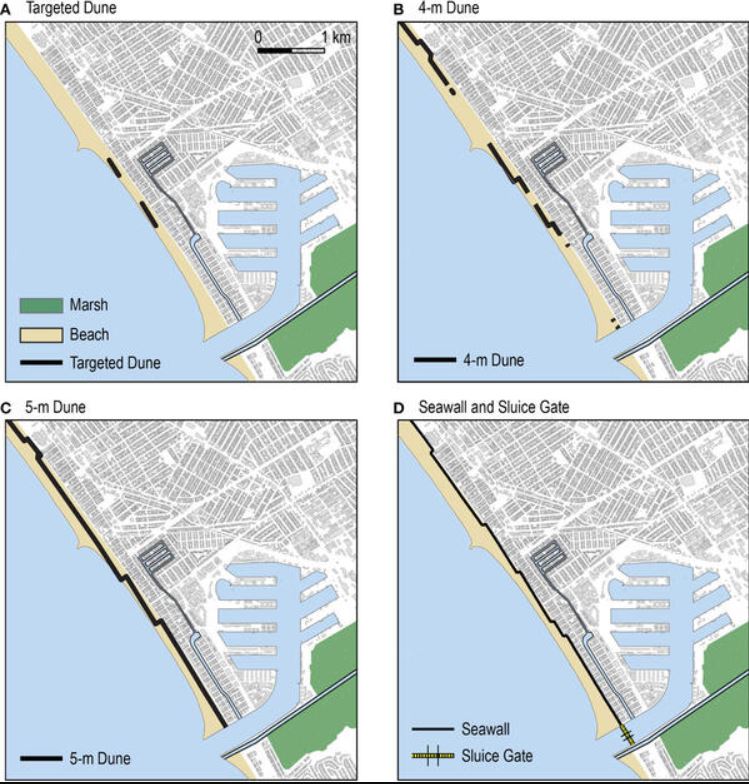 Scientists from the University of Texas at Arlington, University of Arkansas, and the USGS Pacific Coastal and Marine Science Center used the USGS Coastal Storm Monitoring System (CoSMoS) recently to evaluate the effectiveness of a range of engineered, nature-based, and hybrid coastal adaptation strategies at reducing flooding, economic damages, and impacts to the local population in Marina Del Rey and Venice, California.

Their research suggests that dual approaches to coastal adaptation that address both beaches and adjacent inlets provide the greatest benefits.

They also found that some adaptation strategies may have unintended consequences for coastal residents: engineered approaches that prevent water from entering harbors but provide incomplete or no protection along beaches can exacerbate flooding in beachfront communities.

In a December 2022 episode of The American Shoreline Podcast, USGS Research Geologist Patrick Barnard, a co-author of the new study, explained how CoSMoS fits into the larger role that USGS plays in assessing coastal change hazards.

“As a federal science agency, it is our mission to deliver accurate and actionable science consistently across the country, regardless of county and city resources,” said Barnard.

“With CoSMoS, we can deliver flood projection tools consistently across the country, so that everyone is supported and be engaged in decision making – especially the underserved communities that don’t necessarily have the resources to fund the research and tools themselves, like some counties do.”

Evaluating the effectiveness of various coastal adaptation strategies is especially critical to communities along the populous southern California coast, where nearly 50 percent of the coastline is protected by some sort of structure.

As sea levels rise, beaches are increasingly squeezed between the ocean and an armored coast, with no ability to migrate inland.

“Eventually, these beaches will run out of sand. Coastal change models project that, if we don’t act now to implement effective coastal adaptation strategies, we could lose roughly half of southern California’s beaches by the end of the century.”