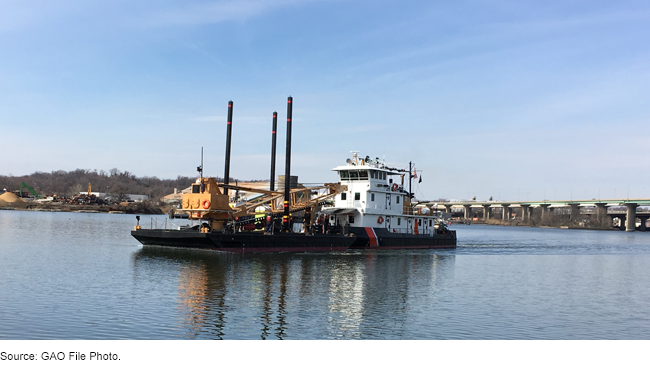 The U.S. Army Corps of Engineers (Corps) has taken steps to implement its Navigation and Ecosystem Sustainability Program (NESP)—a dual-purpose program for navigation improvements and ecosystem restoration along the Upper Mississippi River system.

Specifically, in 2004 the Corps identified 24 navigation improvement projects and 1,010 ecosystem restoration projects and proposed a plan for implementing them. For example, the Corps plans to construct or extend 12 locks to facilitate commercial barge traffic along the river system (see fig.), which the states of Illinois, Iowa, Minnesota, Missouri, and Wisconsin have generally relied on as their principal conduit for export-bound agricultural products. The Corps also plans to restore floodplains along the river system and backwaters that provide habitat for hundreds of species of wildlife. While the total estimated program cost is $7.9 billion, as of October 2020, the Corps has initiated technical studies and designs for 47 NESP projects at a cost of approximately $65 million.

However, the Corps has identified several challenges facing the program, and it has taken steps to mitigate them. Specifically, the Corps was unable to implement NESP projects for 7 years because the program did not receive funding in fiscal years 2011 through 2017, in part because the Corps identified other projects as higher priorities. To mitigate this challenge, the Corps reprogrammed funding to help ensure projects could be executed when funds became available. Another challenge is that the Corps has not yet established partnership agreements that are needed for some NESP ecosystem projects. Corps officials said that about 15 to 20 percent of the ecosystem projects will require partnership agreements in which partners commit to share 35 percent of the project costs, typically through the purchase of land for the project. The officials said that partners may be reluctant to make financial commitments to projects while NESP funding is uncertain. Furthermore, the partnership agreements can take up to 18 months to put in place. To help expedite program implementation, Corps officials said they have pursued projects in fiscal year 2020 that can begin without a commitment from project partners.