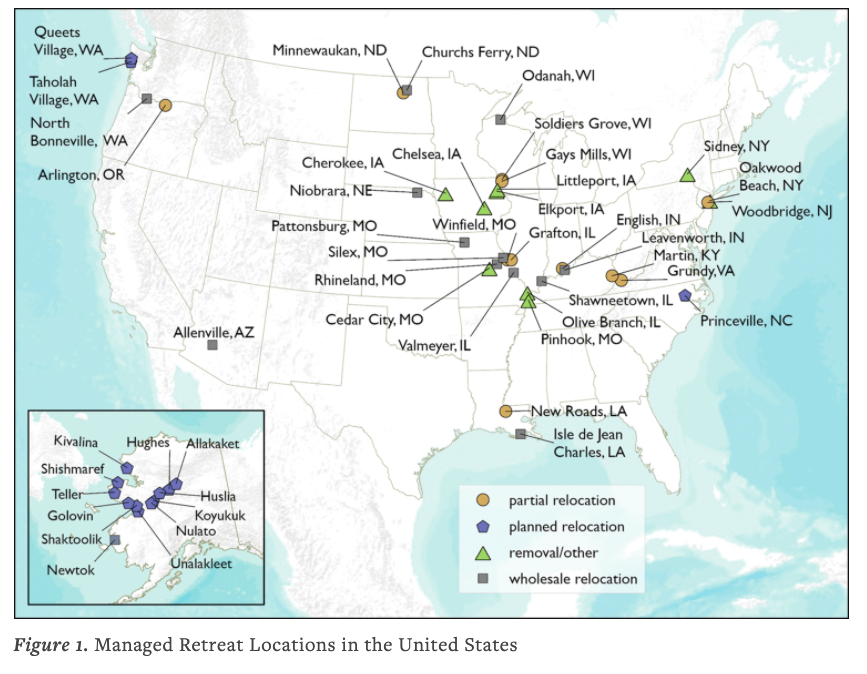 As communities across the United States and around the world are increasingly threatened by climate-driven flooding and sea-level rise, academic researchers and disaster managers alike agree that managed retreat—the abandonment of occupied land and the removal or relocation of population and infrastructure—will eventually be unavoidable. By 2100, nearly 500 US coastal communities and 4.2 million US residents could face disruptive inundation, and worldwide damages and fatalities from flooding could more than double. In light of these projections, a number of new, expensive, and publicly contentious managed-retreat projects are already being discussed, planned, and implemented.

Managed retreat is often framed as an alternative to engineering-focused, defend-in-place strategies like the colossal seawall recently proposed for Miami. The relocation of entire communities, in particular, offers up tantalizing benefits over piecemeal buyouts or removal from at-risk locations; wholesale relocation can eliminate flood risk or other hazards while maintaining the social fabric of a community.

The US Government Accountability Office (GAO) recently “identified few communities in the United States that have considered climate migration as a resilience strategy, and [just] two … that moved forward with relocation.” The GAO and others seem to be unaware that the United States actually has a long history of managed retreat and community relocations. The stories of these towns and the new communities they attempted to build show that managed retreat is not just a theoretical exercise; each case study offers key data for planning and implementing such projects in the future.

Niobrara, Nebraska, is the earliest well-documented US wholesale flood relocation. It occurred more than four decades before US disasters became the responsibility of the federal government. In March of 1881, an ice dam on the Missouri River inundated the floodplain up to 100 miles upstream, putting Niobrara under more than six feet of water. In the aftermath, residents elected to move the entire town. Within two months, buildings were jacked up from their foundations and dragged upslope by horse teams to the new town site a mile and a half away. By January of 1882, most homes and all the town’s commercial structures were in place, and flooding in Niobrara was successfully mitigated for the next 80 years. But that changed with the construction of Gavins Point Dam downstream, which caused sediment to accumulate, raising the groundwater and inundating the community from below. In 1971, 90% of Niobrara’s residents voted to move the town again with the goal of “building a model rural town.” The third version of Niobrara was rededicated in July 1977, at a cost of $14.5 million.