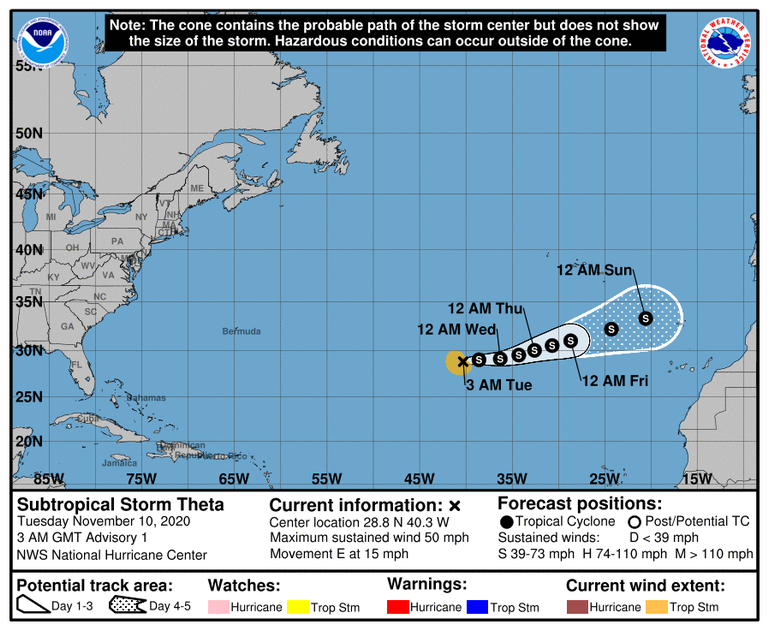 Tropical Storm Theta formed in the Atlantic Monday night. It poses no threat to land but was notable nonetheless, making 2020 a record-breaking hurricane season.

Theta is the 29th named storm of the season, breaking the record of 28 storms previously held by 2005, the most infamous year for hurricanes in modern history. This year is only the second time the Greek alphabet has been used to name storms after the regular list was exhausted.

In 2005, the season ended with Tropical Storm Zeta in late December. Zeta was the 27th storm of the season, but the National Hurricane Center belatedly reclassified an unnamed disturbance as a tropical storm after the season was over, bringing the total to 28.

Now the hurricane center is tracking Theta, which was deep in the Atlantic and posed no threat to land Monday night. Next up could be Iota, a tropical wave in the Caribbean Sea with a 50% chance of strengthening in the next five days.

NOAA predicted this would be an above-average season early on, and mid-season it upped its expectations to call for the highest number of storms it had ever predicted — 25.

But 2020 blew through that in mid-October.