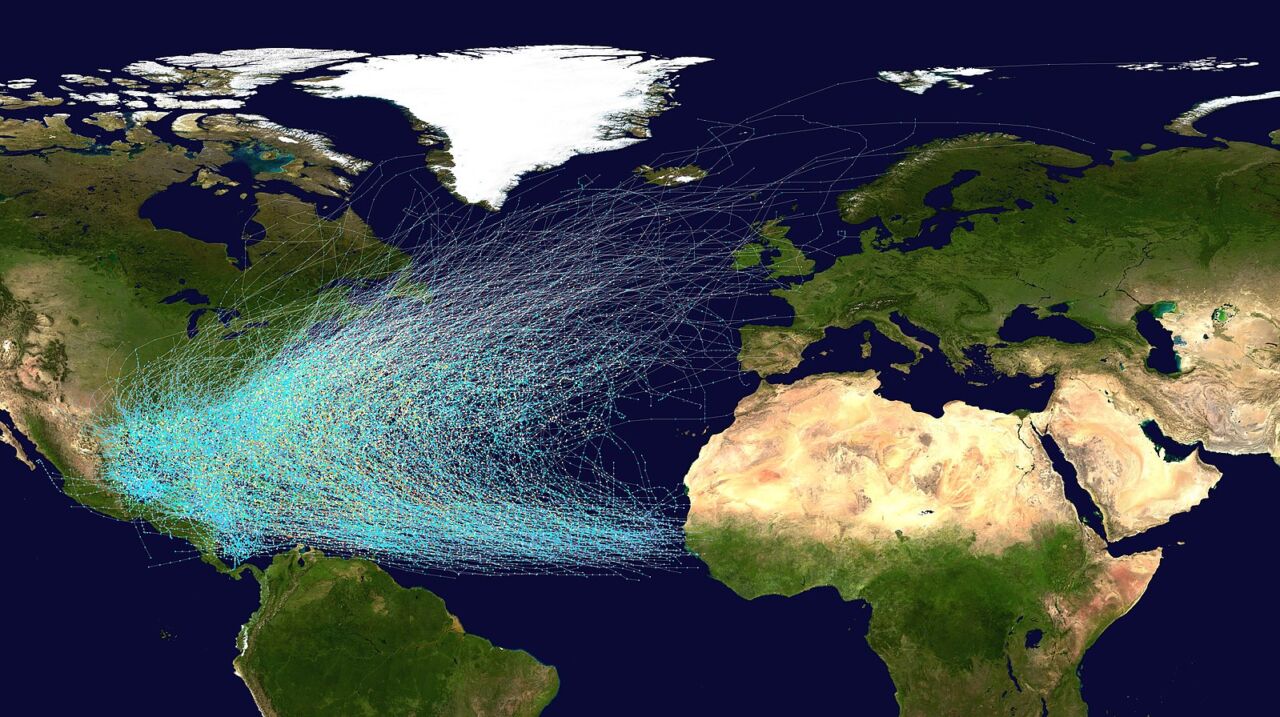 Evidence from millennia of Atlantic storms is not good news for the coast. If you look back at the history of Atlantic hurricanes since the late 1800s, it might seem hurricane frequency is on the rise. The year 2020 had the most tropical cyclones in the Atlantic, with 31, and 2021 had the third-highest, after 2005. The past decade saw five of the six most destructive Atlantic hurricanes in modern history.

Then a year like 2022 comes along, with no major hurricane landfalls until Fiona and Ian struck in late September. The Atlantic hurricane season, which ends November 30, has had eight hurricanes and 14 named storms. It’s a reminder that small sample sizes can be misleading when assessing trends in hurricane behavior. There is so much natural variability in hurricane behavior year to year and even decade to decade that we need to look much further back in time for the real trends to come clear.

Fortunately, hurricanes leave behind telltale evidence that goes back millennia.

Two thousand years of this evidence indicates that the Atlantic has experienced even stormier periods in the past than we’ve seen in recent years. That’s not good news. It tells coastal oceanographers like me that we may be significantly underestimating the threat hurricanes pose to Caribbean islands and the North American coast in the future.

The natural records hurricanes leave behind

When a hurricane nears land, its winds whip up powerful waves and currents that can sweep coarse sands and gravel into marshes and deep coastal ponds, sinkholes, and lagoons.

Under normal conditions, fine sand and organic matter like leaves and seeds fall into these areas and settle to the bottom. So when coarse sand and gravel wash in, a distinct layer is left behind.

Imagine cutting through a layer cake—you can see each layer of frosting. Scientists can see the same effect by plunging a long tube into the bottom of these coastal marshes and ponds and pulling up several meters of sediment in what’s known as a sediment core. By studying the layers in sediment, we can see when coarse sand appeared, suggesting an extreme coastal flood from a hurricane.

With these sediment cores, we have been able to document evidence of Atlantic hurricane activity over thousands of years.

We now have dozens of chronologies of hurricane activity at different locations—including New England, the Florida Gulf Coast, the Florida Keys, and Belize—that reveal decade- to century-scale patterns in hurricane frequency.

Others, including from Atlantic Canada, North Carolina, northwestern Florida, Mississippi, and Puerto Rico, are lower-resolution, meaning it is nearly impossible to discern individual hurricane layers deposited within decades of one another. But they can be highly informative for determining the timing of the most intense hurricanes, which can have significant impacts on coastal ecosystems.

It’s the records from the Bahamas, however, with nearly annual resolution, that are crucial for seeing the long-term picture for the Atlantic Basin.

Why the Bahamas are so important

The Bahamas are exceptionally vulnerable to the impacts of major hurricanes because of their geographic location.

In the North Atlantic, 85 percent of all major hurricanes form in what is known as the Main Development Region, off western Africa. Looking just at observed hurricane tracks from the past 170 years, my analysis shows that about 86 percent of major hurricanes that affect the Bahamas also form in that region, suggesting the frequency variability in the Bahamas may be representative of the basin.

A substantial percentage of North Atlantic storms also pass over or near these islands, so these records appear to reflect changes in overall North Atlantic hurricane frequency through time.

As sea surface temperatures rise, warmer water provides more energy that can fuel more powerful and destructive hurricanes. However, the frequency of hurricanes—how often they form—isn’t necessarily affected in the same way.

The secrets hidden in blue holes

Some of the best locations for studying past hurricane activity are large, near-shore sinkholes known as blue holes.

Blue holes get their name from their deep blue color. They formed when carbonate rock dissolved to form underwater caves. Eventually, the ceilings collapsed, leaving behind sinkholes. The Bahamas has thousands of blue holes, some as wide as a third of a mile and as deep as a 60-story building.

They tend to have deep vertical walls that can trap sediments—including sand transported by strong hurricanes. Fortuitously, deep blue holes often have little oxygen at the bottom, which slows decay, helping to preserve organic matter in the sediment through time.

When we bring up a sediment core, the coarse sand layers are often evident to the naked eye. But closer examination can tell us much more about these hurricanes of the past.

I use X-rays to measure changes in the density of sediment, X-ray fluorescence to examine elemental changes that can reveal if sediment came from land or sea, and sediment textural analysis that examines the grain size.

To figure out the age of each layer, we typically use radiocarbon dating. By measuring the amount of carbon-14, a radioactive isotope, in shells or other organic material found at various points in the core, I can create a statistical model that predicts the age of sediments throughout the core.

So far, my colleagues and I have published five paleohurricane records with nearly annual detail from blue holes on islands across the Bahamas.

The records vary, showing that a single location might not reflect broader regional trends.

For example, Thatchpoint Blue Hole on Great Abaco Island in the northern Bahamas includes evidence of at least 13 hurricanes per century that were Category 2 or above between the years 1500 and 1670. That significantly exceeds the rate of nine per century documented since 1850. During the same period, 1500 to 1670, blue holes at Andros Island, just 186 miles (300 kilometers) south of Abaco, documented the lowest levels of local hurricane activity observed in this region during the past 1,500 years.

Spotting patterns across the Atlantic Basin

Together, however, these records offer a glimpse of broad regional patterns. They’re also giving us new insight into the ways ocean and atmospheric changes can influence hurricane frequency.

While rising sea surface temperatures provide more energy that can fuel more powerful and destructivehurricanes, their frequency—how often they form—isn’t necessarily affected in the same way. Some studies have predicted the total number of hurricanes will actually decrease in the future.

The compiled Bahamian records document substantially higher hurricane frequency in the northern Caribbean during the Little Ice Age, around 1300 to 1850, than in the past 100 years. That was a time when North Atlantic surface ocean temperatures were generally cooler than they are today. But it also coincided with an intensified West African monsoon. The monsoon could have produced more thunderstorms off the western coast of Africa, which act as low-pressure seeds for hurricanes.

Steering winds and vertical wind shear likely also affect a region’s hurricane frequency over time. The Little Ice Age active interval observed in most Bahamian records coincides with increased hurricane strikes along the US Eastern Seaboard from 1500 to 1670, but at the same time it was a quieter period in the Gulf of Mexico, central Bahamas, and southern Caribbean.

Records from sites farther north tell us more about the climate. That’s because changes in ocean temperature and climate conditions are likely far more important to controlling regional impacts in such areas as the Northeastern US and Atlantic Canada, where cooler climate conditions are often unfavorable for storms.

A warning for the islands

I am currently developing records of coastal storminess in locations including Newfoundland and Mexico. With those records, we can better anticipate the impacts of future climate change on storm activity and coastal flooding.

In the Bahamas, meanwhile, sea level rise is putting the islands at increasing risk, so even weaker hurricanes can produce damaging flooding. Given that storms are expected to be more intense, any increase in storm frequency could have devastating impacts.

This article is republished from The Conversation under a Creative Commons license. Read the original article.