Coastwide
Concerned about contaminants, California resident Florencia Ramos has purchased drinking water for herself and her family for more than a decade. Gary Kazanjian / Ensia 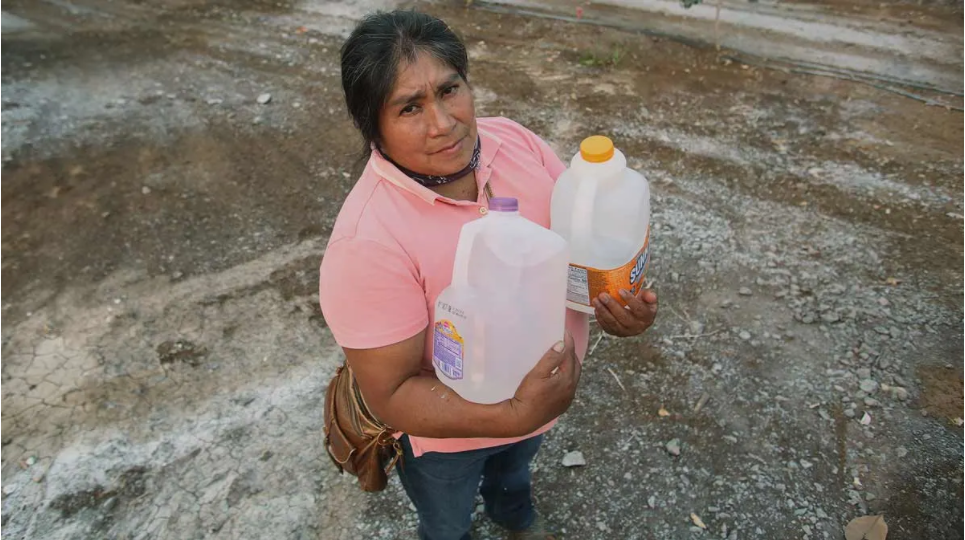 Once a week, Florencia Ramos makes a special trip to the R-N Market in Lindsay, Calif. “If you don’t have clean water, you have to go get some,” says Ramos, a farmworker and mother of four who lives in the neighboring Central Valley town of El Rancho.

She has been purchasing jugs of water at the small store for more than a decade. At first, she was concerned that the county well water that flowed through her tap contained high levels of nitrate, a pervasive health hazard across rural U.S., where nitrogen-rich fertilizer and livestock manure seeped into groundwater. While it never tasted bad, she recalls her water service provider instructing her not to drink it.

Things didn’t get any better in 2016, when El Rancho plugged into the city of Lindsay’s water system. That water was—and still is—polluted with potentially harmful disinfection byproducts, which form when chlorine used to kill dangerous organisms in drinking water reacts with manure and other organic matter.

“We’ve always known our water was contaminated,” says Ramos, through a translator. Ramos is a member of the Agua Coalition, a grassroots group that advocates for safe, clean, and affordable water.

Over the years, she watched as people in her community fell ill. One woman died of cancer; another succumbed to kidney disease. Ramos can’t be sure dirty water was to blame, but she is suspicious and continues to buy bottled water for drinking and cooking.

And it is not cheap. Buying water at the market costs her some $30 per month on top of her approximately $130-per-month tap water bill—not to mention the time lost in making the weekly trips. The financial challenge became even greater last November, when she was laid off from her agricultural work. Her employer told her that she would be back to work by March or April, but when the time came, she was told not to return because of the COVID-19 pandemic.

Across the U.S., drinking-water systems serving millions of people fail to meet state and federal safety standards. Millions more Americans may be drinking unsafe water without anyone knowing because limits set by the Environmental Protection Agency are too high, the contaminants the water contains are unregulated, or their drinking-water source is too small to fit under EPA regulations. (An estimated 20 percent of private wells, which fall outside EPA regulation, have contaminants that exceed EPA standards.)

The nitrate and disinfection byproducts that worry Ramos represent a fraction of the many chemical and biological pollutants that find their way into drinking-water systems through agricultural runoff, discharges from industry, aging pipes, and all the stuff that comes from our toilets, sinks, showers, and washing machines. From coast to coast, people are starting to recognize the pervasiveness of potential problems and rally around efforts to make drinking water safe for all.