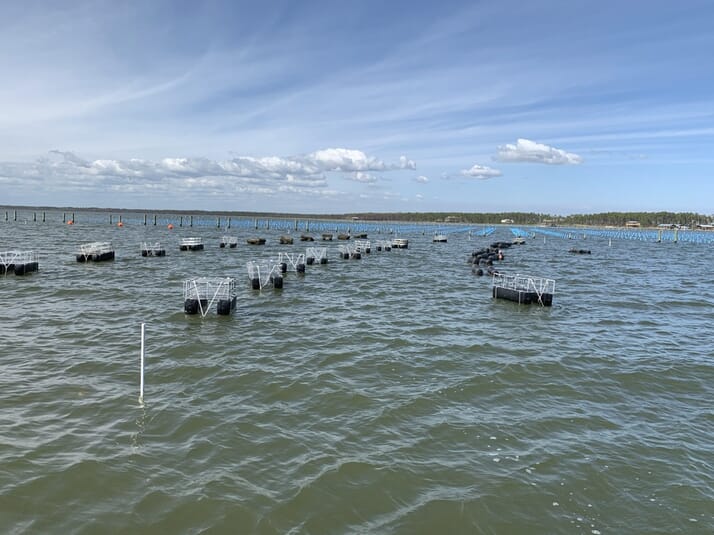 US - The rise of alternative oyster growing methods in the USA

When many people think of oysters they envision a cluster of odd-shaped, rock-like objects, typically growing on some hard surface on or near the seafloor. According to FAO figures, in 1952 global oyster aquaculture production surpassed wild harvests for the first time – with 306,930 and 302,526 tonnes reported, respectively. Aquaculture production has consistently exceeded wild oyster harvests since that time, and in 2019 accounted for 6,125,606 tonnes, compared to 133,984 tonnes of wild-harvested. Traditional culture methods relied (and still rely, in many regions) on natural setting of wild larvae on suitable benthic substrates. But there are other ways to grow oysters, and these techniques can result in significantly greater production volumes.

Off-bottom oyster culture utilises trays, baskets, cages, or hanging lines/ropes mounted on racks or suspended from floats or rafts. This approach allows for more access to natural foods and avoidance of many fouling organisms and predators. Fouling organisms still occur, but one remedy that can be adopted in off-bottom culture involves regular exposure of oysters to the air (weekly or biweekly), in such a way as to inhibit growth and survival of fouling organisms, while oysters close their shells and wait patiently until they are re-submerged.

The early days of off-bottom oysters

To be clear, while it is still a novel concept in Louisiana, off-bottom oyster culture is nothing new. Techniques were already being developed in several countries almost a century ago. While on-bottom culture was the universal method for oyster production in Japan in the mid-1920s, for example, by 1960 the industry had shifted almost entirely to off-bottom techniques and long-line methods were already widely in use in Japan during the 1940s.