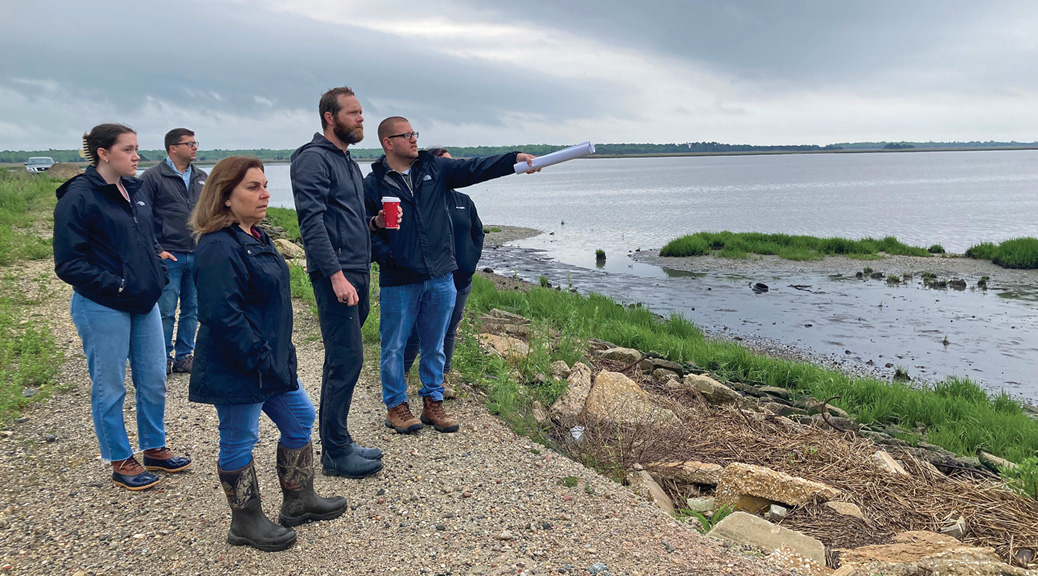 Landscape architects are working with the U.S. Army Corps of Engineers and building new networks through the Engineering With Nature program. The implications could be transformative for both.

A needle that falls in the southern reaches of the New Jersey Pinelands might find itself washed into the Maurice River and carried by its current to Delaware Bay. The Maurice flows south in tight coils, and before it reaches the estuary, it’s forced into one final wide bend around a long dike at Matts Landing, near the old bayside oyster towns of Bivalve and Shell Pile.

Gathered at the base of the dike one morning last spring was a group of engineers and researchers, milling about under a cloud-swept sky as they waited for Monica Chasten, a project manager for the U.S. Army Corps of Engineers Philadelphia District, who is overseeing the first dredging of the Maurice River in 20 years. They were also joined by Sean Burkholder, an assistant professor of landscape architecture at the University of Pennsylvania Stuart Weitzman School of Design and a member of the Dredge Research Collaborative, a loose affiliation of landscape architects who have been studying the movement and reuse of sediment since 2010.

The tide was out. Mudflats stretched out into the salty water on the bay side of the dike. Sanderlings and willets scampered and flocked. Slowly, the group walked out onto the dike, and began talking about how the mud from the bottom of the Maurice River might be used to create new marshland at its mouth. Could the dredging tube be laid across the dike to transfer sediment from one side to the other, or would that put the dike at risk of collapse?

“You could think about putting the dredge pipe, at least for a period of time, up on the marsh and letting [sediment] flow down into it,” Chasten said. “Which is kind of the Engineering With Nature approach, to let the landscape do the work.”

“Yeah,” Burkholder said. “It’s just a matter of making sure we have a baffle or something up there so we’re not blowing the marsh out while we’re placing.”

They talked this way for an hour, making their way down the dike. Should a Y-valve or a spreader be used for multidirectional distribution? They’d have to wait until after the horseshoe crab nesting season to do any major placement. And how would they manage people’s expectations about the future of the place? Dumping thousands of cubic feet of sediment into the mudflats would be sure to kill most of the existing vegetation before anything that looked like new, healthy land could be seen emerging.

By way of refocusing, Chasten proclaimed, “The primary mission of this project is to clear the channel.”

Over the past decade, the U.S. Army Corps of Engineers has begun purposefully incorporating natural processes and nature-based features into some of its flood-control and navigation projects through a program called Engineering With Nature (EWN). The corps, deeply committed to acronyms and bureaucratese, describes the program as “the intentional alignment of natural and engineering processes to efficiently and sustainably deliver economic, environmental, and social benefits through collaboration.”

Engineering With Nature is staffed by a small group of employees who act almost as internal consultants to the corps’s regional districts, which are tasked with actually carrying out infrastructure projects. It has published two atlases highlighting engineering projects in the United States and around the world that embody the EWN principles. But it’s still too early to know the program’s long-term impact, both on the corps and on coastal and flood-control infrastructure.