International
Mathias Jonas (second from right) at an IHO Council and Observers meeting in Monaco in October 2022. Priorities for the coming years were discussed, including the transition to digital data services using S-100 and the Universal Digital Data Model, as well as the role of hydrography in global initiatives such as the digital twin of the ocean. (Image courtesy: IHO) 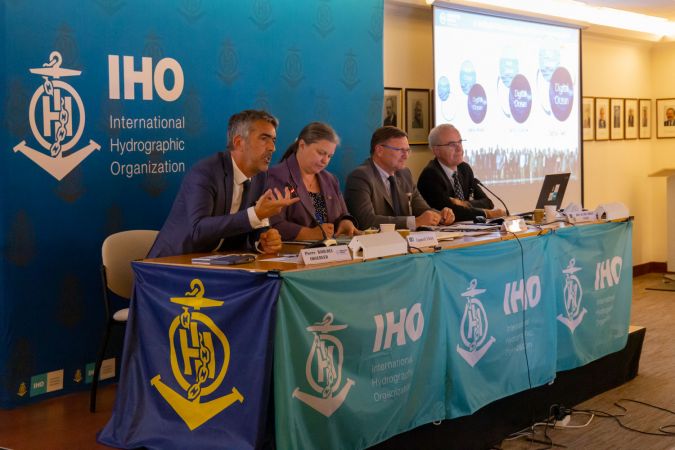 Over the years, hydrography has experienced several revolutions, both in terms of technology and standards, which culminated in November 2022 in the IMO adopting a Resolution on Performance Standards for Electronic Chart Display and Information Systems (ECDIS).

This brings S-100 and related products a step closer to becoming reality at sea and these, in turn, will pave the way for autonomous navigation and a complete digital twin of the ocean. But how did we get to this stage? What were the main innovations that brought us to where we are today?

The first revolutionary development in hydrography came as hardware. The German physicist Alexander Behm was granted patent no. 282009 in July 1913, which referred to a method for measuring ocean depth based on sound and echo intensity. Before this, Behm had developed photographic recordings of sound propagation based on experiments in an eight-litre aquarium to study sound propagation in water. In the best engineering tradition, Behm continued his experiments, and in the years to follow he developed a working echosounder based on the echo time and his short time meter, with which he measured the smallest time units in a technically simple and onboard way. In 1922, hydrographic surveying made a quantum leap with the introduction of hydroacoustic methods for measuring water depths. It is no coincidence that the establishment of the precursor to the IHO in 1922 – the International Hydrographic Bureau – took place at the same time as the introduction of electronic solutions for systematic surveying of the seabed. The annual bulletin of the Bureau – the International Hydrographic Review – was full of articles over the following decade discussing the new opportunities that this technology brought to civil and naval applications.

Moving forward another 50 years, the publication highlighting the 50th anniversary of the IHB in 1971 announced the first steps towards the creation of an international series of nautical charts – the INT charts. Based on an agreed cartographic representation of natural and anthropogenic features in the marine environment and a common symbology associated with them, this series aimed to create a consistent global portfolio of bilingual nautical charts underpinning the rapid globalization of sea trade and supporting the safety of life at sea. The INT chart standardization became (and still is) one of the pillars of the IHO as a standardization body. The introduction of the INT charting scheme was not only a great achievement in standardization, but also marked the end of the dominance of a handful of chart-producing nations running a global portfolio in their mother tongue. INT charts became a symbol of national sovereignty and pride for countries that had never before engaged in surveying and mapping of their domestic waters. They were therefore the main driver of the now 98 coastal states that constitute the IHO and that are committed to international cooperation based on agreed technical standards.

It took approximately two decades before the INT process was in full motion. At this time – late 1980s, early 1990s – another revolutionary development appeared on the horizon, once more driven by hardware but now combined with a completely new element: software. The approach to bringing digital nautical charts onboard was remarkable since it was top-down. The IMO and IHO created performance and technical requirements for the functions of this new device: ECDIS. IHO Standards for the format and presentation of the data content were successfully tested for prototypes, but motivating national Hydrographic Offices to regularly produce data in S-57 ENC format proved difficult, so that the ‘fuel’ for these off-the-shelf computer-based devices was inadequate. This changed as companies conquered the market with payable systems offering all the advantages that electronic (or, as we say today, ‘digital’) navigation holds, and high-quality and up-to-date nautical chart data coverage has been achieved as Hydrographic Offices have added ENCs as products to their traditional paper chart portfolios. Today, about 70 national Hydrographic Offices produce and disseminate ENCs for their waters. The market is fed by a collaborative trio of data producers, private data providers and OEMs delivering the onboard ECDIS devices.

ENC/ECDIS is one of the best examples of global technical standardization led by intergovernmental organizations, here the IMO and the IHO, in collaboration with industry. The top-down approach bore results in the end but needed a push from industry. Soon after consolidation of this technological approach from the late 1990s, hydrography got another boost – this time from the larger community of marine stakeholders.