Coastwide
Courtesy of The Surfrider Foundation 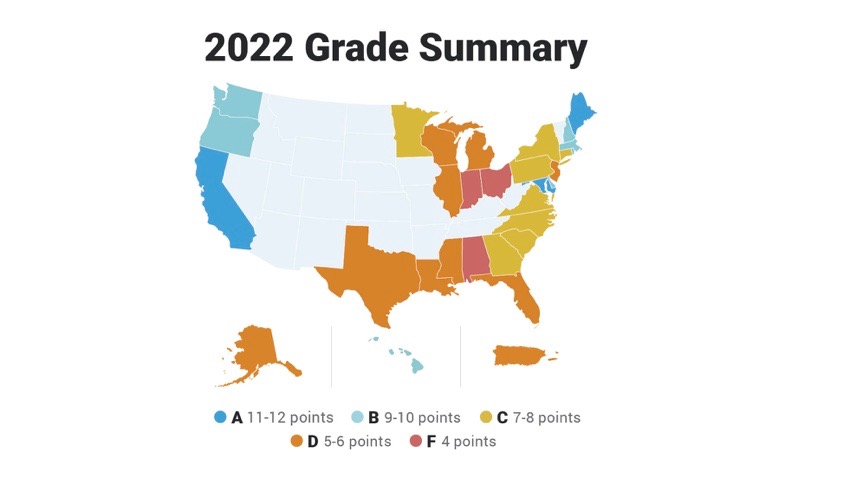 The Surfrider Foundation is a nonprofit environmental organization dedicated to the protection and enjoyment of our world’s ocean, waves and beaches for all people through a powerful activist network.

The Surfrider Foundation released its sixth annual State of the Beach Report, which grades 30 states and the territory of Puerto Rico on comprehensive laws and policies to protect our nation’s beaches from coastal erosion, sea level rise and poorly planned development. For the second year in a row, this year’s report reveals that 67% of coastal areas assessed are performing at ‘adequate’ to ‘poor’ levels, with some of the lowest grades earned by states that are most often affected by extreme weather and worsening climate events.

“Rising seas and more powerful storms are already damaging community infrastructure, shrinking coastlines and diminishing the public’s ability to enjoy our favorite beaches across the country,” said the Surfrider Foundation’s Senior Manager of the Coast and Climate Initiative, Stefanie Sekich-Quinn. “It is imperative that local, state and federal governments work together to protect our coastal communities from the growing impacts of climate change. Long-term climate planning not only safeguards our coastal communities, but it also makes economic sense. A recent report found that if the U.S. fails to take significant climate change action, it could cost $14.5 trillion (in present value terms) to our economy over the next 50 years. Surfrider’s report provides a road map for states to improve coastal management and proactively plan for climate change impacts.”

Out of 30 states and the territory of Puerto Rico, only 11 states earned a grade of either an ‘A’ or ‘B.’ The remaining coastal states are performing at a ‘C’ level or less, including the majority of areas that have been impacted the most significantly by extreme weather events. While the Northeast and West Coast states earned a ‘B’ average, the Southeast, Island and Mid-Atlantic states collectively earned a ‘C’ grade overall and the Great Lakes and Gulf of Mexico states scored a ‘D’ average.

Each state or territory was graded on a set of 12 criteria separated into four major categories, including sediment management, development, coastal armoring and sea level rise. The highest-scoring states have strong policies regarding coastal building setbacks, restrictions on coastal armoring, limiting development and redevelopment, and the advancement of progressive sea level rise policies that encourage local governments to incorporate climate adaptation measures into land use plans. In comparison, the lowest-scoring states tend to have less stringent policies regarding development in hazardous coastal zones, ineffective or nonexistent prohibitions on coastal armoring, poor sediment management and a lack of sea level rise policies.

“Surfrider has intentionally been increasing our work on climate change mitigation and adaptation to help provide solutions to this global issue,” said Sekich-Quinn. “In addition to the graded assessments, we have also included targeted suggestions for improvements for each state in our report. While the climate emergency is daunting, Surfrider is working around the country every day with our network of volunteers and local representatives to help protect our communities, ecological resources and recreational access.”

Since Surfrider released its inaugural report in 2017, 12 states have made improvements to coastal policies, with advancements in sea level rise planning and coastal resiliency in light of climate change.

To find out how to help advance your state to the next level to prepare for urgent climate change impacts, visit Surfrider’s State of the Beach Report or find out more at Surfrider.org.

About the Surfrider Foundation

The Surfrider Foundation is a nonprofit grassroots organization dedicated to the protection and enjoyment of our world’s ocean, waves and beaches for all people through a powerful activist network. Founded in 1984 by a handful of visionary surfers in Malibu, California, the Surfrider Foundation now maintains more than a million supporters, activists and members, with over 200 volunteer-led chapters and student clubs in the U.S., and more than 800 victories protecting our coasts. Learn more at surfrider.org.