Caribbean
Invasive lionfish are more easily captured at dawn and dusk, when they're more active, according to a new U of A study that could help improve the efficiency of efforts to keep the predatory trespassers at bay. Credit: Mark Albins, OSU 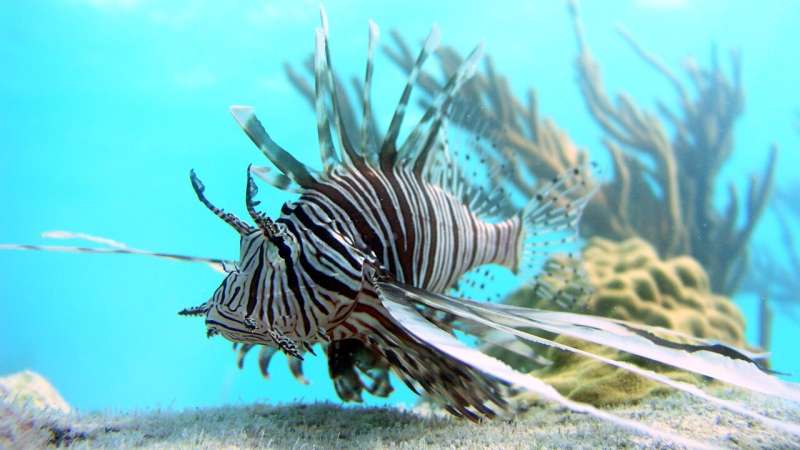 Although time is in short supply in the war against the lionfish invasion in the Atlantic and Caribbean, a University of Alberta study suggests taking time to plan the where, when and who of this fight will give wildlife officials the best shot at keeping the voracious trespassers at bay.

"Many invasive species removal plans must now strive for suppressing densities rather than total eradication of invasive lionfish due to their widespread range and detrimental effects on native species," said Alexandra Davis, lead author and post-doctoral researcher in the Faculty of Science.

Biologists believe lionfish, native only to the Pacific and Indian oceans, were introduced into the Atlantic at least as far back as the early 1980s by aquarium owners releasing unwanted pet lionfish into nearby coastal waters, where they are known to have endangered hundreds of native fish species.

Lionfish are gape-limited predators, which means they swallow their prey whole, and can grow to a formidable half-metre long. They have no natural predators in the Atlantic, thanks in part to 18 venomous spines, and can devastate a population of their coral reef-dwelling prey—killing as much as 95 percent—in just a couple of years.

And while efforts are underway to control the population of invaders threatening marine ecosystems from Florida and across the Caribbean reaching as far south as Brazil, Davis said the point of this paper was to see whether her team could predict different factors that would make lionfish removals faster and more efficient.

"One of the core concepts behind this research is that we're never going to get rid of lionfish, they're going to be there forever, but we want to be able to manage them as cost-effectively and efficiently as possible, and also get the most ecological benefit," said Davis, a researcher in ecologist Stephanie Green's lab.

For the study, the team modelled a number of factors that might influence removal, such as the size, density and behaviour of the fish. They also looked at whether habitat and time of day makes lionfish removal easier or harder, as well as the experience of the removers themselves.

Davis's models showed that if removal efforts are focused to dawn and dusk, when lionfish are active, marine ecosystem managers will save a minute or more per lionfish removed.

Experience was also a big time saver. Those who worked for the service, for instance, were one to two minutes more efficient per lionfish than volunteers who showed up for lionfish derbies.

Of course, the number and size of fish in an area increased the chances of catching them, but whether fish were active or passive wasn't a predictor.

"Without having to get in the water, you can send your most experienced divers out at dawn and dusk and you're going to save time, which of course equates to money saved for the removal efforts," she said.

Davis noted the next step for managers is to use the available data to use finite resources as efficiently as possible.

"They also have to think about what we're trying to conserve and what are the other resources we value," she said.

Provided by University of Alberta