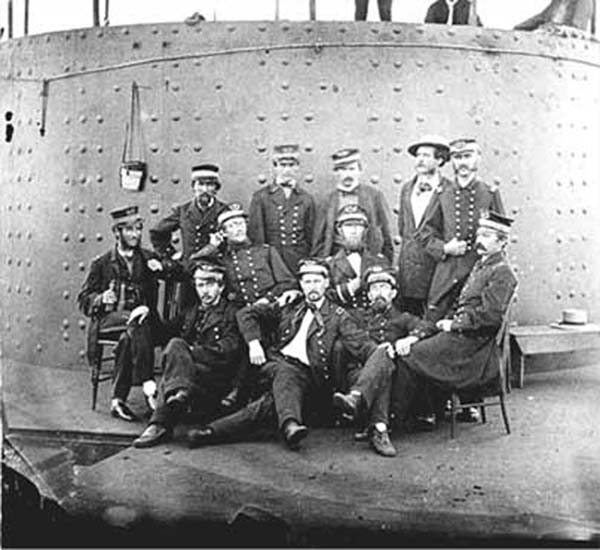 On July 26 at approximately 9:00 am, Navy saturation diver BMCS Wade Bingham, who was excavating in the Monitor’s turret near one of the cannons, encountered two bones that may be the remains of one of the ironclad’s lost crewmen.

Immediately, we implemented the procedures contained in our Expedition Operations Manual for just such a contingency. We called archaeologist Eric Emery to the communications van, where NOAA’s Jeff Johnston was already talking to the diver. Emery was assigned to the expedition by the U.S. Army’s Central Identification Laboratory in Hawaii (CILHI) to consult with NOAA and the Navy in the event that possible human remains were located. He also wrote the procedures plan.

Jeff and Eric were joined by CDR Bobbie Scholley and NOAA’s John Broadwater, who were quickly updated on the situation. Eric was authorized to guide the diver through a series of measurements that would determine the exact location of the bones within the turret. Later, the area was documented with digital still and video photography and the bones were covered for protection. At that point, work inside the turret was suspended so that the saturation diver could assist the surface-supplied divers in completing the final placement of the “Spider” (see July 22). We expect to resume excavation inside the turret in a few days.

The discovery of possible human remains inside the turret requires us to alter our excavation plans slightly. The remains, along with any associated artifacts and clothing, will be carefully mapped and photographed before removal. Once removed, the remains will be shipped to CILHI for analysis and identification.

It is important to stress that at this point there is no confirmation that the remains are human. Nevertheless, this discovery has been a poignant reminder of the very personal aspect of the work we are doing. We will provide updates to the media and to this Web site as excavation progresses.